An Expensive Filler: Where Was Dermatology?

Jesse D. Jensen DO and Wendy McFalda DO

Abstract
.
We report a 52 year-old female who presented to the dermatology clinic five days post-hospitalization subsequent to hyaluronic acid (Juvederm Ultra Plus) filler injection by a mid-level practitioner. One hour post-injection, the patient reported an intense, diffuse headache with blurry, double-vision that progressed to severe photophobia. She immediately went to the emergency room for evaluation. On examination, no neurologic deficits were identified, however she experienced difficulty counting fingers. The patientâ€™s mention of the facial filler as a cause for her visual symptoms was dismissed by the attending physician. A CT angiogram was ordered and revealed a 2 mm protrusion at the level of the anterior communicating artery suspicious for a tortuous vessel versus saccular aneurysm. A subsequent MRI confirmed a 2 mm outpouching, but discernment between aneurysm versus tortuous vessel was not possible with MRI. She was admitted to the intensive care unit for consultation with neurosurgery.
The patientâ€™s symptoms slowly improved during a two-day observation within the ICU. Neurosurgery subsequently recommended surgical intervention for her suspected aneurysm. The patient questioned the likelihood of the filler procedure contributing to her symptoms, but again, the procedure was dismissed as the etiology. The patient felt uneasy and confused, and left against medical advice to obtain a second opinion from a different neurosurgeon. The second neurosurgeonâ€™s opinion did not substantiate necessity for neurosurgical intervention and interpreted the findings on the CT angiogram as non-relevant. He recommended that she see dermatology.
Upon examination in our clinic, the patient had a violaceous, mottled patch on her left medial cheek. Resolving purpura involved skin of the inferior orbital rim and the supramalar cheek (Figure 1). The left eye had red subscleral hemorrhage along the lateral bulb. The bruise in the midpupillary line was indurated and a healing puncture wound was identifiable. We injected 75 units of vitrase mixed with 1 mL saline into the left medial cheek and alar area. Topical nitroglycerin was prescribed to apply three times daily. Warm compresses were advised to be used periodically. She was followed via phone calls daily until follow-up. The mottling resolved within 24 hours, and no bruising was noted at five days.

The diagnosis was intravascular injection with retrograde cerebral flow. 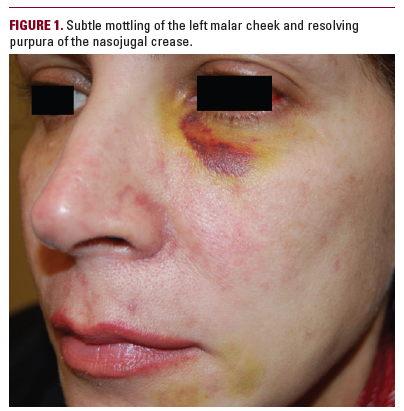 Hyaluronic acids are very safe in the hands of experienced dermatologic surgeons. Local serious side effects may still occur, and are well-reported including ischemia, necrosis, and infection.1 Prior reports of headaches, blindness, and even stroke have resulted from arterial embolization in the alar and glabellar areas from autologous fat.2 Neurologic side effects from HAs have only been reported in four cases.3-6 Park et al reported twelve patients with ophthalmic and retinal artery occlusions, with only four of these being from hyaluronic acids (others were autologous fat).2
Within the midcheek lies the infraorbital artery as it traverses medially from the zygoma as a continuation of the transverse facial artery. This may be inadvertently injected by smallerbore needles, which was likely the case with our patient. Although we canâ€™t prove the location of the HAâ€™s travel, itâ€™s likely that an extremely small amount of HA flowed retrograde into branches of the ophthalmic artery creating blurriness and photophobia. The potential for arterial injection is always