An Atypical Presentation of PLEVA: Case Report and Review of the Literature

Pityriasis lichenoides et varioliformis acuta (PLEVA) is a rare, self-limited, cutaneous disorder of unknown etiology. Clinically, PLEVA is characterized by the sudden onset of scaly, erythematous macules and papules localized to the trunk and proximal extremities. We report the case of a patient who presented with multiple erythematous papules and plaques on the palms, forearms, and dorsal feet.

A62-year-old woman presented for evaluation of recurrent itchy lesions distributed over her upper and lower extremities including her hands and feet. She reported that the rash had been present for several months, but that she had a similar rash one year before. At her previous evaluation one year before, she reported the lesions had also occurred on the hands and feet but were accompanied by lesions in the mouth. At that time, she was diagnosed with Hand, Foot, and Mouth disease via biopsy and positive coxsackie titers. After treatment with clobetasol 0.05% cream, the lesions resolved, until this current episode.

Physical examination at the time of her current outbreak revealed multiple erythematous and hyperpigmented scaling, 1-3 cm papules and plaques on both palms and forearms, some with a collarette of the scale and others with necrotic changes and excoriations. Also, there were several similar hyperpigmented papules on the dorsal feet and ankles. Oral lesions were absent. Two 4 mm punch biopsy specimens were obtained from the left palm and right wrist. 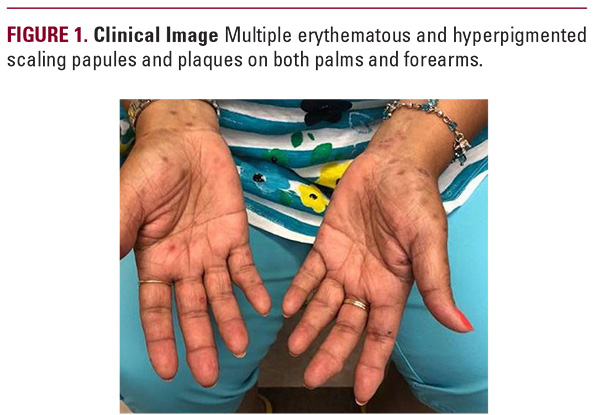 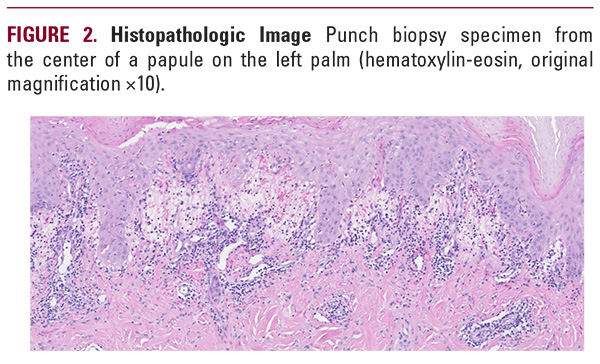