A Survey of Dermatologistsâ€™ Preparedness for Natural and Manmade Disasters

Abstract
Natural and manmade disasters cause a range of dermatologic manifestations, including secondary infections after a flood,1 irritation from blistering agents used in chemical warfare,2 or acute and chronic effects of cutaneous radiation syndrome.3 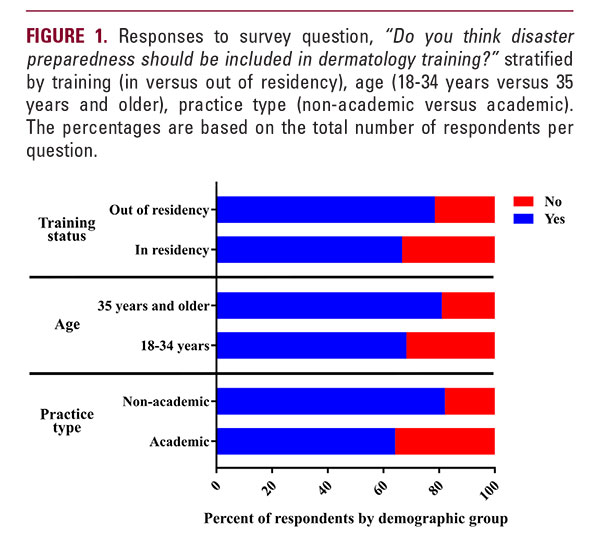 Natural and manmade disasters cause a range of dermatologic manifestations, including secondary infections after a flood,1 irritation from blistering agents used in chemical warfare,2 or acute and chronic effects of cutaneous radiation syndrome.3 Recognizing and managing these disaster sequelae require diagnostic acumen, knowledge on reporting, and short- and long-term management strategies. However, a 2003 survey revealed that 88% of dermatologists felt unprepared to respond to a biological attack.4 Years later, this survey herein examines whether the dermatology field has advanced in its bioterrorism preparedness. We additionally assessed dermatologistsâ€™ preparedness for natural, chemical, and radiological/nuclear disasters, as well as their perceptions about the appropriateness of disaster training in dermatology. Our IRB-approved survey was disseminated via the Orlando Dermatology Aesthetic and Clinical Conference listserv. Statistical analyses were performed using chi-square tests, with a p-value less than 0.05 considered statistically significant. The percentages reported are based on the total number of respondents per question.

Of the 1,677 emails sent, 959 opened the email, 296 clicked the link, and 256 completed the survey; 14 participants did not hold MD/DO licenses and were excluded from the analysis (N=242). Survey data on demographics and disaster preparedness are presented in Table 1. More females (61.0%) than males (38.6%) completed the survey. Dermatologists of all ages were included, with the largest group being between 25 and 34 years old (45.0%). Thirty-two percent were in residency and 67.8% were beyond residency. Forty-one percent worked in academic practices, 30.4% were employees of group practices/health systems, 26.3% were private practice owners, and 2.5% reported other/mixed practices.

Only 28.9% received training in disaster preparedness/response; the likelihood of training did not significantly vary by practice type, age, or residency status. Of the trained respondents, the majority would be comfortable caring for patients affected by natural events (78.2%), intentional chemical exposures (52.7%), and natural biological events (50.9%). Fewer respondents reported being comfortable with unintentional chemical exposures (47.3%), intentional biological attacks (34.6%), and nuclear/radiological injuries (16.4%). Forty-one percent received training during medical school, 37.5% during residency, and 42.9% after residency; 16.1% of respondents additionally reported receiving training through the military. The most common training mediums were lectures/conferences (59.4%), self-directed learning (34.4%), and field-based training (26.6%).

Seventy-five percent thought disaster preparedness/response should be part of dermatology training, while 25.3% reported that it should not, most commonly because they felt it is not important (58.6%) or that they have other educational priorities (46.6%). Compared to non-academic dermatologists, academic