A Noduloulcerative Disease That Still Lingers After All These Centuries

A 42-year-old African American man with AIDS was evaluated for fever and a painful eruption that developed one week after re-starting anti-retroviral therapy. The eruption progressed in a cephalocaudal direction with crops of pustules that progressed to tender ulcers. Interestingly, the patient had developed a painless genital ulcer one day prior to presentation. His HIV infection had been complicated by a lymphoma of the right mandible (treated effectively with chemotherapy and local radiation five years previously).
On examination, the patient was ill-appearing with widespread eruption of inflamed papulonodules (some purulent) and ulcerated plaques (some with a dry, central eschar) (figure 1). His soles had violaceous plaques with collarettes of scale; there was a painless ulcer on his penis with rolled and indurated edges.
The patient was seropositive for RPR (titer 1:8) and Treponemal antibodies; he was seronegative for Histoplasma, Aspergillus, Bartonella and Coccidioides. His CD4 count was 252. CT radiography (head and neck) found no recurrence of lymphoma. Light microscopy studies of lesional skin demonstrated a diffuse infiltrate of lymphocytes (somewhat atypical cells), neutrophils and eosinophils with overlying necrotic epidermis, focal ulceration and crust. Special stains (PAS, Fite, spirochete) as well as hybridization studies for EBV and HSV were negative. Tissue cultures for fungi, yeast, Nocardia, typical and atypical Mycobacteria and bacteria were negative.
The patient's fever and skin lesions improved dramatically following intravenous penicillin. The patient's presentation and course is consistent with lues maligna, a manifestation of secondary syphilis that has been mostly described in the setting of HIV1 infection, sometimes demonstrating vasculitis on histology (although not necessary for diagnosis2). It is unclear whether this patient's immune recovery from the initiation of anti-retroviral therapy immediately prior to developing this eruption played a role in its severity. This case highlights the atypical and severe presentation of syphilis in the setting of advanced immunosuppression. 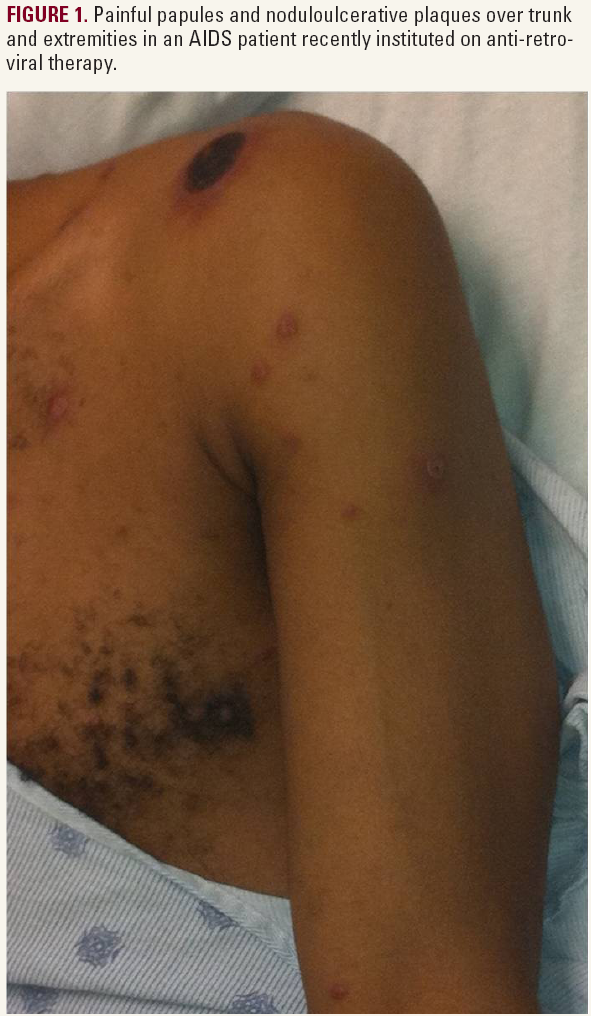