Abstract
Mohs micrographic surgery can be unpredictable with respect to the level of difficulty of individual cases, especially when preoperative information is limited. In a retrospective study, Sahai and Walling found complex tumors as defined by requiring four or more stages to clearance to be associated with: recurrent tumors, basal cell carcinoma (BCC) with aggressive histology, tumors with a pre-operative size greater than 1 cm and tumors on the nose.1 The authors created a simplified system for â€œtriagingâ€ Mohs surgery cases in order to predict case complexity and, thus, be better able to manage the scheduling of those cases. Data gathered from 12 months of utilizing this system was used to validate the systemâ€™s ability to predict case complexity with respect to number of stages for tumor clearance and complexity of reconstruction.

J Drugs Dermatol. 2011;10(3):257-259.
Our practice is a university-based referral center with most referrals coming from within the university, a local Veterans Affairs medical center and private practice offices locally and as far away as four neighboring states. Information accompanying each referral can be quite varied and often included one or a combination of the following: referral letter, photo, pathology report and clinical notes.
A system to triage cases into one of two categories, large or small, was developed based on clinical data, location, size and/ or histology characteristics (Table 1). The system was all-or-none, 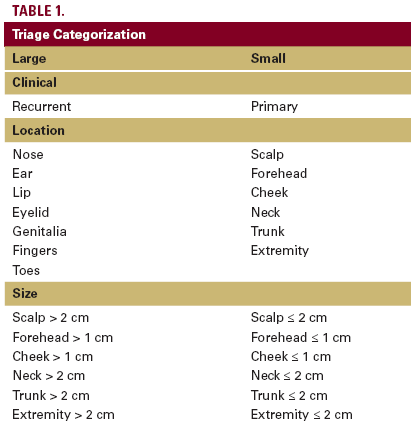 such that if any criteria met the definition of a "large" case, the case was categorized as such. Data was gathered for cases from July 1, 2008 to June 30, 2009 including: the triage category, number of stages to tumor clearance and type of repair.
Data were analyzed to determine the average number of stages to tumor clearance for the "large" and "small" categories as well as the distribution of types of reconstructions for each category (Tables 2 and 3).
Statistical analysis, using the Pearson's chi-square, was utilized in testing the null hypothesis that there is no relationship between cancer size and the reconstruction type; in other words, reconstruction type is independent of the cancer size, showed a P value for the test to be <0.005 (Table 4). This confirms there is a statistically significant relationship between the cancer size and reconstruction type. 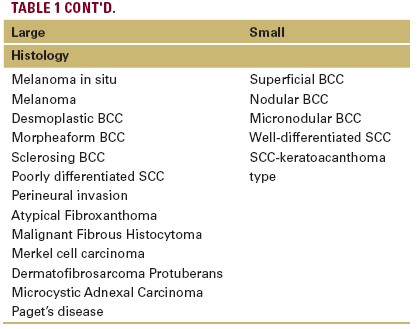