Pyogenic Granuloma of the Lip With Complete Resolution After Topical Propranolol

Physical examination revealed a 1.3 x 1.5 cm erythematous crusty nodule involving the left upper vermilion lip (Figure 1A). A shave biopsy was performed and demonstrated a dense, mononuclear, plasma cell-rich inflammatory infiltrate with neutrophils and several dilated blood vessels (Figure 2A-C). Immunohistochemistry (IHC) was performed and the blood vessels were highlighted with CD34. The plasma cell infiltrate proved to be polyclonal due to positivity of both kappa and lambda light chains (Figure 2D). The clinicopathologic correlation favored the diagnosis of pyogenic granuloma (PG) over the diagnosis of plasma cell granuloma. The authors believe the superficial nature of the biopsy prevented the more characteristic lobular architecture with the feeding vessel to be seen. Surgical excision was considered; however, as a therapeutic trial to avoid surgery, the patient was initially treated with 1% propranolol ointment twice daily with complete regression after 10 weeks.

PG is a common, acquired, benign vascular neoplasm of the skin and mucous membranes, also known as lobular capillary hemangioma.1-3 It is most frequently seen in children and young adults and has been associated with the use of medications, oral contraceptives, congenital syndromes, and hormonal changes including pregnancy.1 Clinical presentation consists of a friable, erythematous papule or nodule located on the head and upper extremities with a tendency to rapidly grow and bleed with trauma.1,2 Typical histologic findings are proliferation of capillaries with plump endothelial cells separated into lobules by a fibromyxoid stroma. In some instances, a thicker blood vessel can be seen at the base (â€œfeeding vesselâ€).1

In the present case, there was a dense plasma cell infiltrate associated with a modest vascular proliferation and a subtle stroma. Furthermore, the lobular pattern and the â€œfeeding vesselâ€ were lacking. For that reason, plasma cell granuloma was considered as a differential diagnosis. Plasma cell granuloma is a rare reactive tumor-like proliferation composed mainly of plasmacytic infiltrate, usually seen in the oral mucosa.3,4 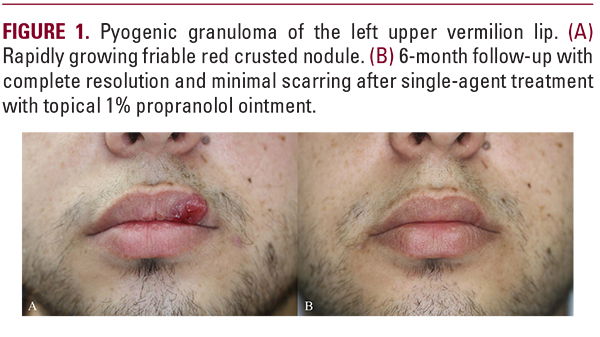 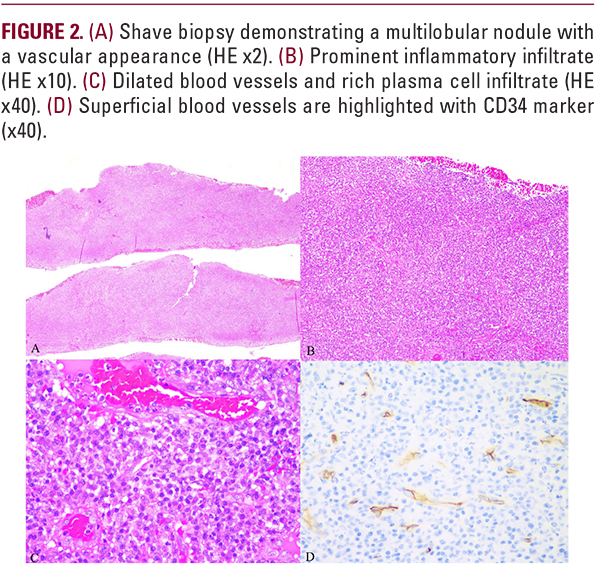 While some PG may resolve spontaneously, they can be locally destructive and cause morbidity due to bleeding and even disfigurement. Multiple therapeutic options have been reported; however, no standard of care is proposed due to the lack of reported efficacy with any one therapy.5 Treatment options include destructive approaches such as excision, electrodesiccation, cryotherapy, and ablation with CO2 or vascular lasers.5,6 Potential complications are scarring, pain, and hypo