A 45-year-old white woman presented with a 3-month history of a rapidly growing lesion on her back. She was initially seen in the emergency department and referred to dermatology for treatment of a presumed pyogenic granuloma. She reported having a ”mole” in that location prior to the lesion enlarging to its current size. The patient was otherwise healthy. Physical examination revealed a 3.5×2.4 cm pink, bloody, ulcerated, pedunculated nodule on her mid upper back (Figures 1 and 2). No cervical, axillary, or inguinal lymphadenopathy was detected. An excisional biopsy was performed (Figure 3).
Histologic examination revealed a pedunculated nodular melanoma with 12.5 mm Breslow´s depth of invasion and ulceration (Figure 3). Pigmentation was absent. The stalk of the pedun 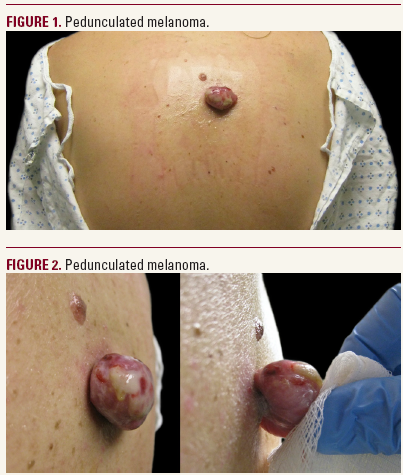 culated nodule was free of tumor. Immunostaining showed S100, MELAN-A, and HMB45 positivity. The patient underwent sentinel lymph node biopsy of the bilateral axillae and wide excision of the original biopsy site. The re-excision was negative for residual malignancy, and sentinel nodes were negative for metastatic melanoma. The patient´s melanoma was clinically and histologically staged as stage IIc (T4bN0M0), and she had no signs of recurrence at 12-month follow-up.
First described by Volger in 1958,1 pedunculated melanomas have since been shown to be a more virulent variant of nodular melanoma.2-7 Pedunculated melanomas frequently present as ulcerating nodules, most often located on the back.2 The majority are non-pigmented, and, as highlighted in our case, this often results in misdiagnosis as pyogenic granuloma, fibroepithelial polyp (skin tag), or intradermal nevus.2-4 The incidence of pedunculated melanoma is 2% to 5.8%.2,5
When compared with non-pedunculated nodular melanomas, pedunculated melanomas tend to present at an earlier age, have a greater tumor thickness at the time of diagnosis (≥4.0 mm vs. 1.50–2.99 mm), a higher incidence of ulceration, 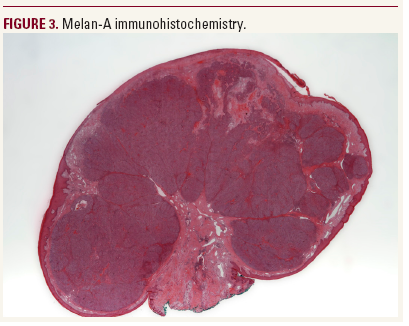