A 7-year-old male was seen in pediatric dermatology clinic for a lifelong history of blisters and skin discoloration. His family described blisters on the left heel and left hip (sites of hepatitis B vaccination and heel stick) at four days of age. He later developed blisters on the mouth, hands, and feet at sites of trauma. The blisters had improved over time and now occurred infrequently on the buttocks and perirectal skin in hot, humid conditions. There was no family history of bullous skin disorders.
Around age 2, mottled pigmentation was noted on the neck, back, and extremities. This had become more prominent over time.
Physical examination revealed mottled pigmentation on the neck, back, and extremities (Figure 1a). There was onycholysis and longitudinal ridging of most fingernails and toenails as well as a palmoplantar keratoderma. There were rare bullae on the buttocks and perirectal area.
A punch biopsy from a blister, taken during infancy, showed focal subepidermal clefting (Figure 1b). Type VII collagen and laminin 332 were normally expressed with immunofluorescent mapping.
Mutational analysis of the KIND1 and KRT5 genes using PCR and DNA sequencing detected no mutations. A heterozygous duplication was detected in exon 6 of the KRT14 gene; this mutation was not found in DNA samples from the patient's parents and brother.
This patient was diagnosed with Epidermolysis Bullosa Simplex with Mottled Pigmentation (EBS-MP). This rare form of EBS manifests at birth with either localized or extensive bullae. The mottled pigmentation begins later with hyperpigmented and hypopigmented macules on the trunk, lower abdomen, and proximal limbs. Palmoplantar keratoderma can also develop during infancy; nail dystrophy and mild cutaneous atrophy develop later in some patients. Both the cutaneous fragility and the pigmentary changes often improve with age.1 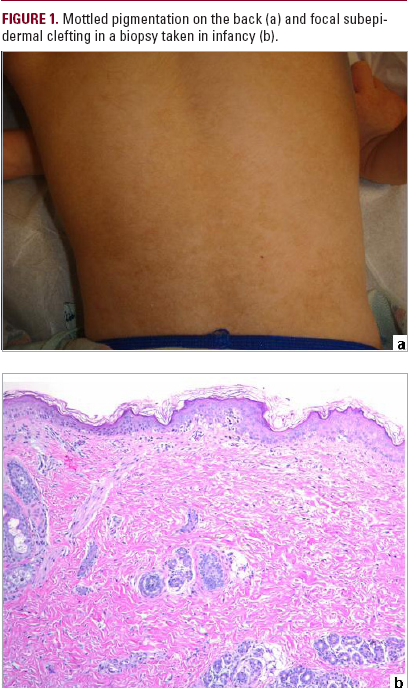 EBS-MP is generally inherited in an autosomal dominant manner, although our patient's parents did not share his mutation. A number of families with EBS-MP have previously