An open label pilot study was conducted between 2008–2011 in patients with advanced stage MF/SS (stage IIB-IVB) who had ECOG ≤1 and no previous interferon therapy. Five patients with MF [IIB (4/7), IIIB (1/7)] and 2 with Sézary Syndrome (SS) were enrolled with a median age of 58 years (range, 38–79) (Table1). They received PEG-IFN-α-2b at a starting dose of 1.5 μg/kg, administered subcutaneously once weekly with dose escalation up to 9 μg/kg or maximum tolerated dose. PUVA treatment or narrow-band UVB was scheduled three times weekly following the institutional standard protocol. Primary end point was to 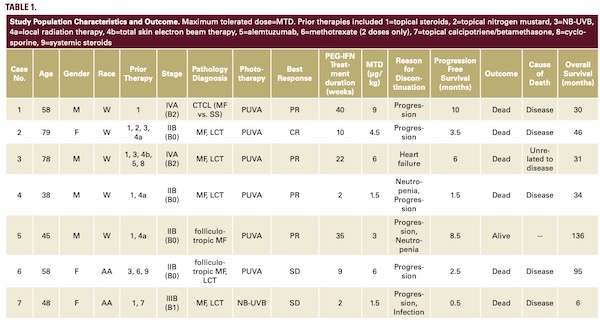