Lichen amyloidosis is characterized by “rippled”, brown, extremely pruritic plaques, typically on the lower extremities, that is often refractory to medical intervention. Here, a case of lichen amyloidosis successfully treated with a fixed combination of halobetasol-propionate 0.1% and tazarotene 0.45% lotion is presented.

A 53-year-old male with a relevant medical history for eczema presented with a pruritic rash on his left shin for several years recalcitrant to several topical corticosteroids including triamcinolone, clobetasol, and halcinonide ointments.

On physical exam, there was an ill-defined, dark brown, plaque composed of firm scaly papules on his left pretibial area (Figure 1).

Lichen amyloidosis, a form of localized cutaneous amyloidosis, is caused by keratinocyte derived amyloid deposition in the superficial dermis. An uncontrolled inflammatory response likely plays a role in the pathogenesis of this disorder. Sweat gland dysfunction may lead to leakage of sweat into the epidermal/dermal junction, which triggers inflammation, causing keratinocyte apoptosis, and amyloid formation.1 Alternative theories suggest that cytokeratin, released from apoptotic basal keratinocytes, are phagocytized by macrophages leading to amyloid formation.2 Given the role of immunoregulatory proteins in macrophage recruitment and migration, suppression of such proteins with topical corticosteroids could consequently decrease amyloid formation. 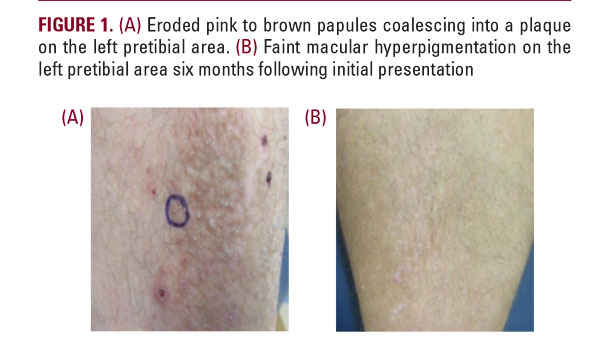