Afamelanotide: An Orphan Drug with Potential for Broad Dermatologic Applications

Abstract
Afamelanotide (SCENESSE®) is a synthetic analogue of α‐melanocyte-stimulating hormone that is FDA-approved to increase pain-free sunlight exposure in adult patients with erythropoietic protoporphyria. Its dual photoprotective and anti-inflammatory effects also make it a promising therapy for other photosensitive dermatologic diseases that are resistant to treatment. The PubMed/MEDLINE and ClinicalTrials.gov databases were searched for literature and ongoing trials describing the use of afamelanotide in treating cutaneous diseases. There is randomized controlled trial (RCT) evidence for the successful use of afamelanotide in several conditions beyond erythropoietic protoporphyria, including polymorphic light eruption and vitiligo. Smaller studies have also demonstrated its efficacy in treating acne vulgaris, Hailey-Hailey disease, and solar urticaria. No serious adverse effects with afamelanotide use have been reported, though diffuse hyperpigmentation is experienced by almost all patients. Larger scale studies are needed to confirm the efficacy of afamelanotide in treating dermatologic conditions beyond erythropoietic protoporphyria, and further research should focus on determining the safety, efficacy, and optimal dosing of afamelanotide for pediatric patients.

Afamelanotide (SCENESSE®) is a synthetic analogue of α‐melanocyte‐stimulating hormone (α-MSH) that induces tanning of the skin. α-MSH is a product of the proopiomelanocortin gene (POMC), which is cleaved into the peptide hormones adrenocorticotropic hormone (ACTH), α-, β-, and γ-MSH, β-endorphin, and β-lipotropin. Damage to the skin by ultraviolet radiation (UVR) is sensed by p53, which can enhance expression of the POMC gene.1 α-MSH acts as a paracrine hormone on melanocytes by binding to their surface MC1R receptors, inducing the expression of enzymes required for the synthesis of melanin and photoprotective eumelanin.1 Transfer of melanosomes to keratinocytes produces tanning. Afamelanotide binds MC1R and leads to the same downstream effects as α-MSH.2

α-MSH has also been shown to decrease cutaneous inflammation,3-4 and thus afamelanotide has been used to treat dermatologic diseases that have photosensitive and/or inflammatory components, such as erythropoietic protoporphyria (EPP) and Hailey-Hailey disease. Various dose efficacy studies have shown that a 16-mg afamelanotide implant applied subcutaneously has maximal tanning efficacy.5 Afamelanotide, designated as an orphan drug, was approved by the European Medicines Agency for treatment of EPP in 2014 and by the U.S. Food and Drug Administration for treatment of EPP in 2019. There are no contraindications to afamelanotide use, with adverse reactions limited to implant site reactions, nausea, and hyperpigmentation.6 However, patients who are receiving the implant should receive total body skin exams twice a year due to the risk of darkening of pre-existing nevi.6

Due to its favorable safety profile and dual tanning and anti-inflammatory effects on the skin, afamelanotide has potential broad efficacy in treating a variety of cutaneous conditions.

This review seeks to characterize the existing literature on the uses of afamelanotide in treating dermatologic diseases.

The PubMed/MEDLINE and ClinicalTrials.gov databases were queried with the term “afamelanotide.” All non-duplicate citations were screened by full text for clinical results of afamelanotide use. Articles not written in English were excluded (Figure 1). 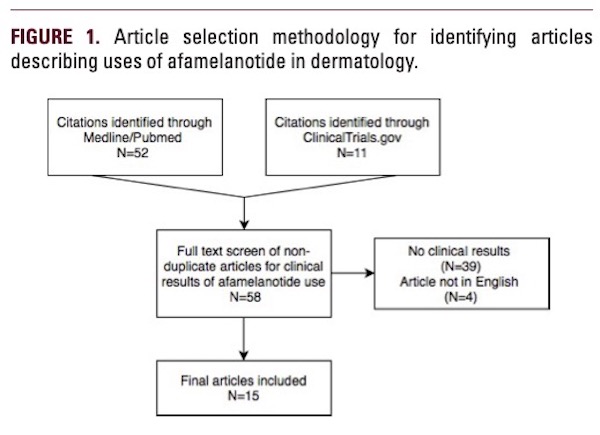