ARTICLE: Clinical Evidence of the Anti-Aging Effects of a Collagen Peptide Nutraceutical Drink on the Skin 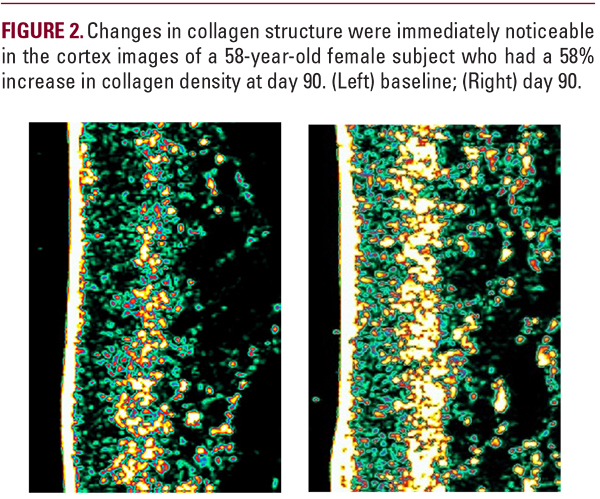 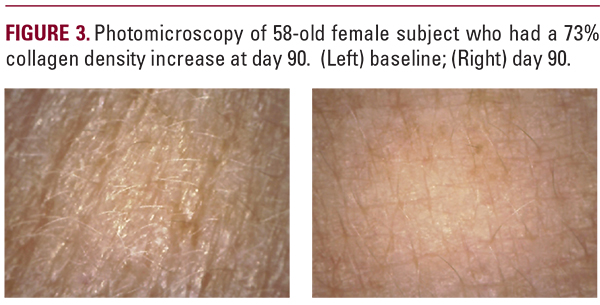 (Bordeaux, France)27 investigated the effect of oral ingestion of fish collagen peptides versus placebo on skin properties in vivo. Effects on the skin’s collagen structure were measured by visual and laser scanning technology. Volunteers included 106 Caucasian females ages 40–65, who were given a 10 g daily dose of a powdered drink, fish collagen peptides, or placebo (maltodextrins) for the study duration of 84 days.27

Another take-away from the COSderma study is that hydrolyzed marine collagen is known to be the most abundant source of Types 1 and 3 collagen, the same collagen types that comprise the skin. The supplement thus provides the ability to not only reach the target organ (the dermis), but also trigger HAS2 receptors’ natural hyaluronic-acid production. This increases hydration and skin elasticity, reduces fine lines and deep wrinkle formation, and benefits photodamaged skin.27

Global Skin Rejuvenation of the Face
In a placebo-controlled, double-blinded, clinical case study carried out by Santi Labs (London, UK), the impact of a 90- day supply of Skinade on global skin rejuvenation of the face was assessed.28 A total of 20 participants, including 15 participants who took the supplement and 5 control subjects, were monitored every 15 days and measured every 30 days throughout the course of the study. Cortex Technology measured a number of skin parameters including collagenstructure imagery, hydration, elasticity, TEWL, skin color, photomicroscopy, and skin pH. After a 90-day course of Skinade, collagen density increased 25.5%, skin elasticity increased 28%, and skin hydration increased 34% in the treated subjects compared with the subjects in the placebo group. Changes in collagen structure were immediately noticeable in the cortex images of a 58-year-old female subject who had a 58% increase in collagen density at day 90 (Figure 2) and in a 58-old female subject who had a 73% collagen density increase at day 90. Photomicroscopy indicated significant improvements in skin texture and pigmentation by day 90 (Figure 3).28

Clinical Observations
Dermatologist emperical observations after treatments have indicated a decrease in bruising when the oral nutraceutical was taken daily for a duration of 4 weeks. While under this treatment, patients reported a decrease in bruising, a common phenomenon that can be detrimental to patients’ self-esteem. Within a period of three 3 months, during follow-up visits, patients were able to perceive a difference in the texture and tone of their skin.

Absorption and Persistence of Collagen Hydrolysate
Optimization of the bioavailability of the active ingredients in Skinade gives the nutraceutical an advantage over other collagen supplements. By developing an isotonic solution of low molecular weight marine collagen, vitamins, methylsufonylmethane, fatty acids, and amino acids, the formulation has a 90-95% absorption rate that ensures the nutrients are available in the dermis. Researchers investigated the absorption mechanism of low–molecular-weight collagen hydrolysate (LMW-CH) and its effects on osteoporosis in rats.29