Lymphomatoid papulosis (LyP) is a chronic skin condition, characterized by recurrent eruptions of papules and nodules with or without central necrosis that spontaneously resolve. This condition was originally described by Macaulay in 1968 as a self-healing rhythmical paradoxical eruption that was clinically benign yet histologically malignant.1 Clinically, it is defined by papules that wax and wane, are generally less than 1cm in diameter, and heal spontaneously after 6–8 weeks with subsequent scarring.2

LyP is classified by the World Health Organization (WHO) as a subtype of primary cutaneous CD30+ lymphoproliferative disorders (CD30+LPD), which also includes primary cutaneous anaplastic large cell lymphoma (pcALCL).3,4 Histopathologically, LyP and pcALCL can show significant similarities, and clinical correlation is often needed to delineate the two, with a common description of LyP lesions being <1cm, while pcALCL is often >2cm. Moreover, a borderline/intermediate phase is often discussed amongst cutaneous lymphoma experts, which is characterized with 1–2cm lesions that can wax and wane or be more persistent. The clinical differential diagnosis can also include pityriasis lichenoides et varioliformis (PLEVA) and pityriasis lichenoides chronica (PLC) that manifest with crops of self-limited necrotic papules and T-cell infiltrates, which can be clonal.5 These entities are often CD30 negative, although reports of CD30+ PLEVA are known.5,6 Because of the similarities seen in CD30+ LPDs and PLEVA/PLC, clinicopathologic correlation is often the best way to distinguish between these entities.

Here, we describe the case of a woman who initially presented with a persistent eruption lasting more than two years. Her lesions did not spontaneously resolve but they did respond to topical steroids for a brief period of time. This case represents a histopathologically and clinically atypical lymphoproliferative eruption that is best characterized as a localized CD30+ LPD.

A 38-year-old female presented to a dermatology clinic with concern about an eruption on her right leg for at least two years in duration prior to treatment. She had no significant past medical, surgical or family history, and was taking no medications or over-the-counter supplements. On physical exam, she had a cluster of 5–10 mm pink to red papules in an agminated pattern on her right antero-medial thigh (Figure 1). A punch biopsy was performed and sent for histopathological analysis. Pathology showed a dense, wedge-shaped lymphoid infiltrate with abundant CD3+/CD30+ enlarged atypical T-lymphocytes with significant exocytosis. There was associated papillary dermal edema with admixed reactive lymphocytes and eosinophils (Figure 2A–D). 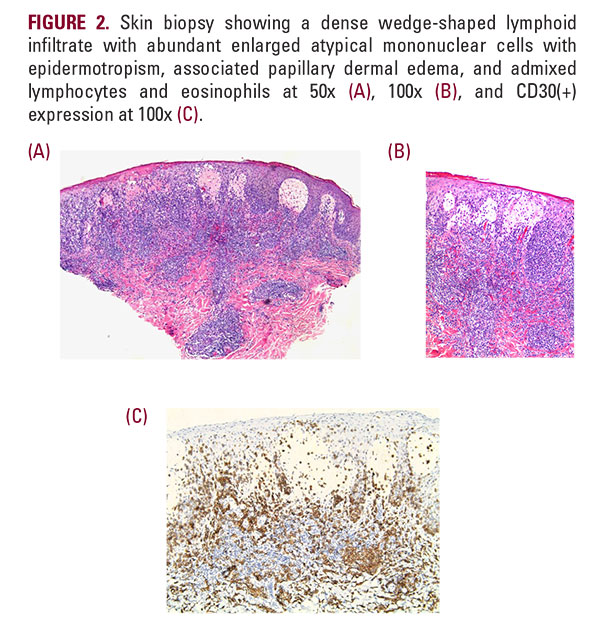