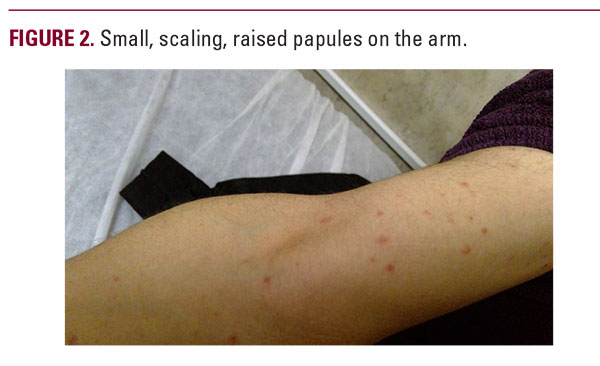 DISCUSSION
Pityriasis lichenoides is a rare, idiopathic, acquired disease, characterized by groups of scaly erythematous papules that may persist for a long time. It is diagnosed by its appearance and clinical history and usually confirmed by histopathological examination. The span of the disease includes relatively mild chronic form to a more severe acute eruption. The mild chronic subtype, known as PLC is characterized by the slow development of small, scaling papules that spontaneously flatten and regress over a short period of time. At the other end of pityriasis lichenoides spectrum is the acute form known as pityriasis lichenoides et varioliformis acuta (PLEVA), characterized by the abrupt eruption of small scaling papules that progress into blisters and crusted red-brown spots. The pathology of both PLEVA and PLC is distinctive. There is limited data on efficacy of successful treatment for PLC. PLC has been reported during treatment with TNF-alpha blockers, including infliximab,5,6 adalimumab,7,8 etanercept.9 Most of these cases were successfully treated with methotrexate. Only one case of PLC has been reported during treatment with etanercept in a patient with rheumatoid arthritis. PLC improved with the use of topical steroids without the necessity of discontinuing treatment, as observed in our patient. Since high levels of TNF-alpha have been detected in PLEVA, TNF-alpha blockers have been hypothesized as potential therapy of this condition. Indeed, etanercept was found effective by Nikkels et al in a patient with a multiresistant PLC, but relapse was observed after drug withdrawal.10

CONCLUSION
Our case completely improved with topical steroid usage and remission of AS was observed with continued etanercept treatment. PLC may be another possible cutaneous adverse reaction of TNF-alpha antagonists. However, further studies are recommended to validate these findings and consider PLC as adverse effect to this class of drugs.

DISCLOSURES
The authors declare no conflict of interest.