Treatment of Sebaceous Hyperplasia by Laser Modalities: A Review of the Literature and Presentation of Our Experience With Erbium-doped Yttrium Aluminium Garnet (Er:YAG) 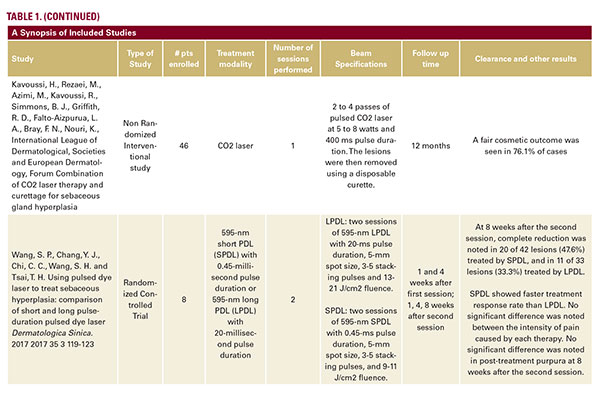 with two pulses. Lesions larger than 5mm in diameter required additional single pulses to the entire lesional area. Patients received a total of one to five treatments (average of 2.2), spaced four to six weeks apart. Patients and investigators rated overall improvement of treated lesions on a 0 to 4 scale: 0=0% (none), 1=1% to 25% (moderate), 2=26% to 50% (good), 3=51% to 75% (very good), and 4=76% to 100% (excellent). The average patient and physician improvement scores were 3.1 (‘‘very good’’) and 3.5 (‘‘very good’’), respectively. After two to three treatments, 84% of lesions shrunk greater than 50%, and 70% shrunk greater than 75%. Adverse effects included one atrophic scar which improved months later and one case of transient hyperpigmentation.

Noh et al describe a 55-year-old man with multiple SHs to the face treated with two session of CO2 laser.13 After recurrence within six months, he was treated with an additional session of CO2 laser, which cleared the remaining lesions. He was subsequently maintained on isotretinoin reaching a cumulative dose of 150mg/kg within two years and has not experienced recurrence for one year since discontinuing isotretinoin. Gonzalez et al report a 51-year old woman with two sebaceous hyperplasia to her face treated with two overlapping pulses of 585-nm PDL at 7.0 J/cm2 with a 5 mm delivery point.14 Photographs and optical images by confocal microscopy (CM) were taken before and after treatment. Follow-up evaluation at two weeks, two months, and six months revealed progressive involution with no evidence of pigmentary changes or scars. Additionally, confocal images obtained immediately after treatment showed the selective photothermal damage confined to the blood vessels. Two-week and two-month follow-up showed a non-hyperplastic epithelial duct with smoother contours, and deeper penetrating images showed dense collagen bundles without dilated dermal blood vessels. Similarly, Schonermark et al also describe a treatment of sebaceous hyperplasia lesions with the 585-nm PDL on their two patients.6 One 62-year-old woman was treated with three sessions of 300-450 ms pulse duration using the 5 mm laser probe with an energy dose of 7 J/cm2 in the first session and 8 J/cm2 in the following two sessions. A second 58-year-old man was treated in two consecutive sessions using a 5 mm laser probe, with 6.5 J/cm2 and 6.8 J/cm2 energy dose, respectively (no pulse duration was specified). Both patients showed complete disappearance of their lesions after their final treatments, with no recurrence or scarring at nine and 13 months after their last sessions, respectively.