treatment to an individual’s skin dryness or oiliness as well as increased compliance.The most critical aspect of topical retinoid therapy is patient education. Patients must be counseled on local skin irritation, characterized by redness and peeling. Furthermore, contrary to common belief, clinical improvement does not correlate with the degree of irritation. A large, controlled clinical study in which 0.025% and 0.1% tretinoin were used showed both formulations to be equally efficacious, but the former was significantly less irritating than the latter.30 Therefore, unlike most medications for which the dosing schedule is regimented, the use of a topical retinoid should be individualized and titrated depending on the skin reaction. Typically, retinoids are applied in the evening given it is inactivated by ultraviolet exposure. Patients are advised to apply the medication initially every other night or a few nights a week, titrating upwards as tolerated.31 The most common adverse effect associated with topical retinoid use is local skin irritation as discussed. This expected response is temporary, but troubling, for many patients leading to decreased compliance. This effect peaks within the first month of treatment and improves thereafter. This can be managed with a temporary reduction in the frequency or amount of retinoid application as well as the liberal use of emollients. There is evidence demonstrating that these measures enhance topical retinoid tolerability without compromising treatment efficacy.32 Systemic retinoid use, as discussed below, is well established as a cause of embryonic death and congenital malformation, and understandably, there is concern regarding potential teratogenicity from long-term topical retinoid use. Studies have shown that systemic absorption of retinoids and changes in retinoic acid in the blood from topical application are negligible. Furthermore, topical administration of tretinoin at doses used for acne has less impact on plasma levels of endogenous retinoids than diurnal and dietary factors.33 As expected, a large, population-based study demonstrated no excess risk of birth defects in offspring born to mothers who were exposed to topical tretinoin during pregnancy.34 While no evidence exists for teratogenicity of topical retinoids in humans, most practitioners delay their use for acne in pregnancy due to medical-legal reasons.Systemic Retinoid in Acne Isotretinoin is extremely effective in treating acne given it addresses the primary etiologic factors associated with acne. It decreases sebum production, targets comedogenesis, and minimizes colonization with Cutibacterium acnes.35 Its use over time has expanded from treating only patients with severe nodulocystic disease in the early 1980s to now patients with less severe disease who fail conventional therapies, exhibit extensive scarring, suffer from significant psychosocial distress, and those with acne fulminans.36 treatmentThe daily dose of isotretinoin is approximately 0.5-1 mg/kg of body weight per day taken with food to maximize absorption.35 However, low dose regimen (ie, 0.25-0.4 mg/kg/day) has been shown to be equally efficacious, similar in inducing remission, with fewer adverse events.37 Previously, it was believed that post-therapy relapse is minimized by administering a cumulative dose of at least 120 mg/kg, which typically results in 6–8 months of therapy.38 This paradigm has shifted and the current recommendations emphasize tailoring the dosing and treatment length to each individual, factoring in demographics, clinical presentation, and comorbidities to maximize success.39 A lag period of 1–3 months may occur before the onset of the therapeutic effect and a flare of acne during the first month may be observed. Continued healing of acne after the discontinuation of therapy is frequently seen. Approximately one-third of patients with acne require a second course of therapy for either persistent disease or relapse. During isotretinoin therapy, other acne treatments, both topical and systemic, are discontinued to avoid enhancing any potential side effects.The most important adverse effect of isotretinoin is teratogenesis. Retinoid-induced birth defects include auditory, cardiovascular, craniofacial, ocular, axial and acral skeletal, central nervous system (hydrocephalus, microcephaly), and thymus gland abnormalities.40 In men, retinoid therapy does not appear to produce abnormalities in spermatogenesis, sperm morphology, or sperm motility.41 However, the recommendation is for men who are actively trying to father children to avoid systemic retinoid therapy.Most patients receiving oral retinoids will develop dryness of the lips, skin, and mucous membranes. More severe cases can lead to retinoid dermatitis. Staphylococcus aureus colonization can also occur due to disruption of the skin barrier caused by isotretinoin- 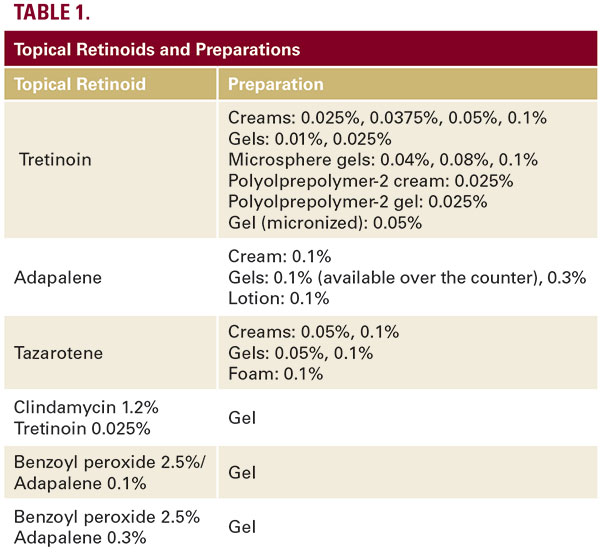