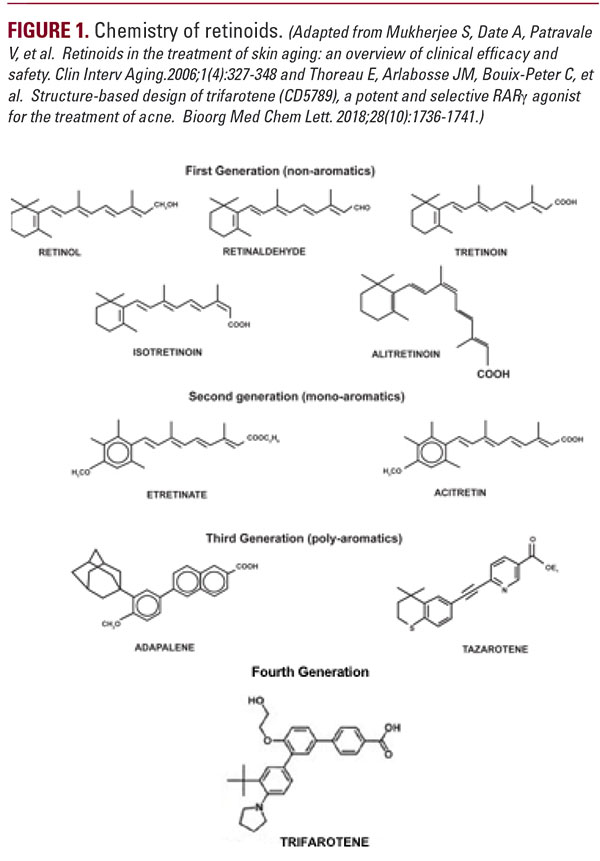 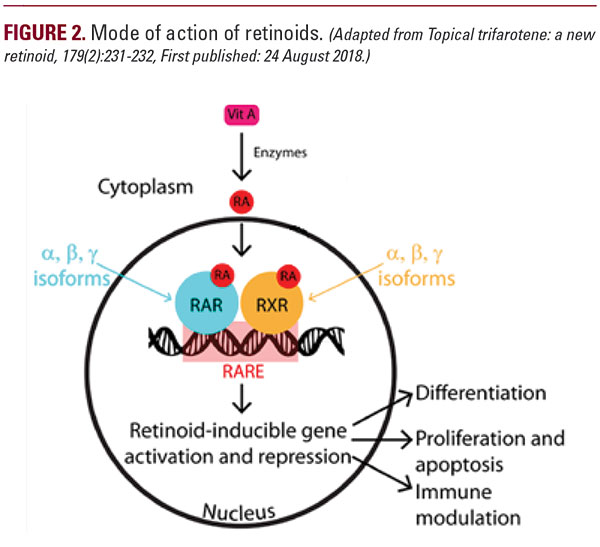 retinoids given their ability to activate the receptor(s) and mediate the retinoid effect.19 Major breakthrough in the understanding of retinoid action came with discovery of the nuclear receptors for retinoids. Retinoids exert physiological effects on DNA transcription through the binding of two receptors, retinoic acid receptors (RAR) and retinoid X receptors (RXR). Each receptor has three isotypes (α, β, and γ) and different retinoids have distinct binding properties to these receptors. For instance, tretinoin binds to RAR-γ and RXR-α heterodimer whereas the newer retinoids adapalene and tazarotene are selective agonists of RARβ and RARγ. Trifarotene, on the other hand, has selective RARγ agonist activity with minimal effect on RARβ and RARα. It is also inactive on the RXR receptor.20 Dimer of the retinoid receptors along with their retinoid ligand binds to specific DNA regulatory sequences named hormone response elements in the promoter regions of retinoid-responsible genes (retinoic acid response elements = RARE). This leads to the downstream biologic effects seen with retinoids (Figure 2).21-24 Each retinoid’s unique receptor activity translates to specific clinical effects, although it is currently unclear how the retinoid’s selective binding directly impacts these endpoints.A key retinoid effect important for acne includes normalization of abnormal follicular differentiation. This leads to loosening of microcomedones, allowing sebum to reach the skin surface to prevent pilosebaceous unit obstruction. Moreover, retinoids can also decrease the expression of Toll-like receptor (TLR)-2, which is elevated in acne lesions, partially activated by C. acnes.25-26 Retinoids also cause sebaceous gland atrophy and a decrease in sebum production, which inhibits inflammation induced by sebum-dependent Cutibacterium.27 Topical Retinoids in Acne It is commonly accepted that topical retinoids are extremely effective for acne treatment, especially for comedonal lesions.28-29 Of the different anti-acne medications, retinoids are considered the first-line and arguably the only agents to normalize the abnormal follicular differentiation seen in acne. By targeting microcomedones, retinoids not only treat, but can also prevent the development of new lesions.28-29 This prophylactic property is the basis for including topical retinoid as the foundation in almost all acne regimens. Moreover, in an era in which providers are called upon to exercise antibiotic stewardship, retinoids are playing an even more crucial role in acne treatment in place of antibiotics.Tretinoin was the first topical retinoid for clinical use and over time, new retinoids have also become available for acne, specifically adapalene and tazarotene. Adapalene is now also sold over the counter. Combination medications with either clindamycin or benzoyl peroxide coupled with a retinoid have also been introduced (Table 1). Unlike other topical retinoids, adapalene’s unique structure renders it resistant to oxidation thus allowing for its combination with benzoyl peroxide. Different formulations and combination therapies allow for flexibility in tailoring the