clinical trials.7 Here, we report on the safety and treatment effect of HP40 based on the anatomic location of the SKs.

A detailed explanation of the study design has been previously reported.7 Briefly, two identical, randomized, double-blind, vehicle-controlled, phase 3 trials (NCT02667236 and NCT02667275) enrolled adults aged ≥18 years with 4 stable, clinically typical, raised SKs (> 0-2 mm thick and 5-15 mm in diameter) with at least 1 SK on the face and at least 1 on the trunk or extremity. A physician investigator identified the 4 target SKs to be treated on each patient, and a non-physician sub-investigator applied the HP40 or vehicle in order to maintain blinding, to address the temporary peroxide whitening effect that could be seen immediately in the active treatment arm. Treatment was applied sequentially to the 4 SKs for 20 seconds per SK at each pass for a total of 4 passes, 1 minute apart. Efficacy was measured at day 106 using the validated Physician’s Lesion Assessment (PLA) scale, in which 0=clear (no visible SK); 1=near-clear (visible SK, not raised); 2=thin SK (≤1 mm); and 3=thick SK (1 mm).7 If any SK was not clear 3 weeks after the first treatment, a second treatment was administered. Sub-analysis of the treatment effect based on the anatomic location of the SK was then conducted. Sensitivity analysis was also conducted using the mean-per-patient (MPP) percent of SKs, defined as the sum of the intra-patient efficacy (ie, percent of target SKs that are PLA=0 in each patient) divided by the number of patients with target SKs for that body area at day 106.Treatment-related adverse reactions were localized skin reactions (LSRs), stratified first by the location of the SKs (face, trunk, and extremity) and then categorized by immediate or delayed post-treatment reactions.

The pooled analysis included 467 patients in the HP40 arm with a total of 1,868 SKs and 470 patients in the vehicle arm with a total of 1,880 SKs. Baseline characteristics of the study population are shown in Table 1. All patients had at least 1 SK on the face; most had 1 or more SKs on the trunk; however, only 30% had an SK on the extremity. Of all target SKs, the majority (59%) were on the trunk, 30% on the face, and 11% on the extremities.The highest treatment effect of HP40, defined as percentage of SKs clear or near-clear (PLA≤1) versus vehicle, was seen on the face (65% vs 10%), followed by the trunk (46% vs 5%), and then the extremities, (38% vs 9%; Figure 1). Findings were consistent in the sensitivity analysis evaluating treatment effect based on the MPP percent of SKs: a higher proportion of clear or near-clear (PLA ≤1) SKs was observed with HP40 in facial SKs compared to vehicle (64% vs 10%) trunk SKs (48% vs 6%) or extremity SKs (35% vs 10%) at day 106. Facial SKs also exhibited the highest likelihood of clearance or near-clearance with a single treatment (43%) followed by the trunk (31%) and extremities (14%). Select photos of SKs before and after treatment with HP40 are shown in Figure 2.Following the first treatment, the most common immediate LSRs after HP40 treatment were erythema stinging and edema (in descending order of frequency by anatomic location). All acute LSRs improved within 1 week, occurred at similar rates regardless of anatomic location, and resolved to none or mostly mild by day 106 (Table 2). Vesiculation (a clinically relevant but less common LSR), occurred at the lowest rate in the extremi 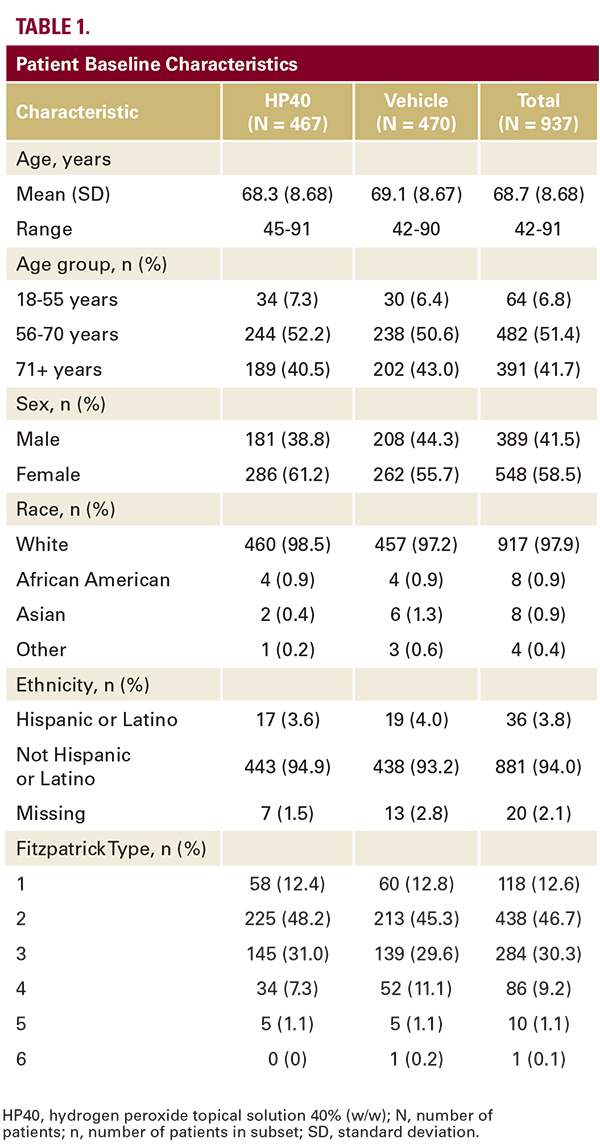