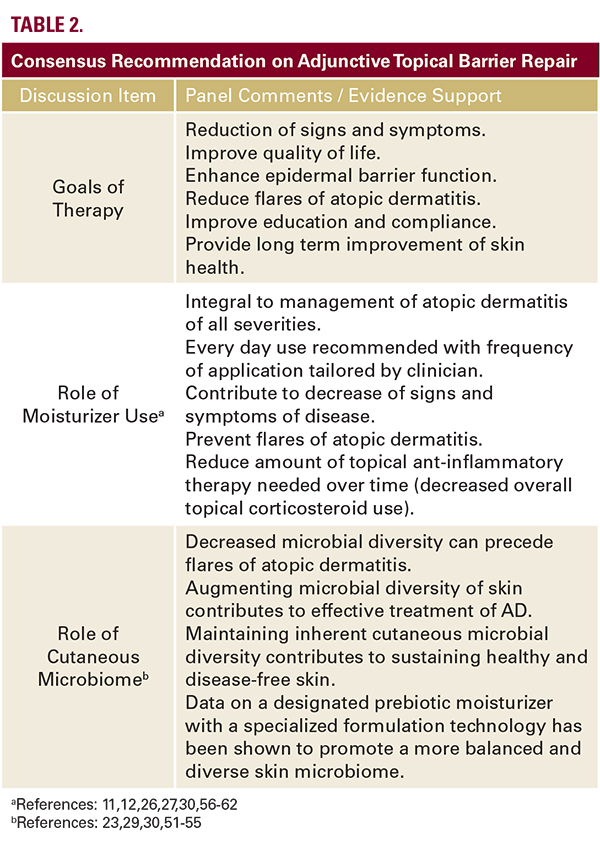 The increased colonization of atopic skin with S aureus is wellestablished.2,11,12,20-23,51 However, what has been recognized more recently as a component of AD pathophysiology is a pattern of dysbiosis, characterized by a temporal association between AD flares and cutaneous microbiome shifting that decreases overall bacterial diversity and further increases staphylococcal predominance relative to other skin bacteria.29,30,52,53 This further decrease in commensal competition among bacteria inhabiting atopic skin is demonstrated by the increased qualitative and quantitative dominance of staphylococci during AD flares (ie, S. aureus) relative to many other bacteria, especially at anatomic sites of predilection.30,52-53 In a human genomic study, bacteria present on healthy skin (n=92) showed a microbial diversity with 250 different genera, as compared to non-lesional and lesional AD skin (n=49) showing a reduced microbial diversity of 154 genera and 137 genera, respectively.54Interestingly, in a study of infants (N=149) with or without a family history of AD, at 3 months, S aureus was more prevalent on skin of infants who later developed AD.55 When compared to age-matched unaffected infants, increased S aureus prevalence was noted at the time of AD onset and also at 2 months before AD onset, suggesting that earlier shifting in skin bacterial colonization may contribute to clinical onset of AD in infancy.Why is S aureus colonization important in the pathophysiology of AD even when clinical infection is not present? The role of S aureus in AD pathophysiology appears to correlate with initiation of and/or prolongation of flares through several mechanisms, including release of superantigens (ie, enterotoxins); stimulation of Th2 activity through cellular production of thymic stromal lymphopoietin (TSLP) and other cytokines (ie, IL-1B, IL-6, TNFbeta); and release of an IgE-reactive protein (fibronectin-binding protein).12,23,51 Role of Adjunctive Moisturizer UseThe apparent question that emerges in management of AD is if adjunctive topical barrier repair approaches, primarily through use of moisturizers, can contribute therapeutic benefit through impact on the underlying pathophysiology of AD?Pharmacologic agents may control flares of AD and sustain therapeutic benefit by modulating specific pathophysiologic pathways, but they may offer limited or adverse effects on the epidermal barrier.2,26 Proactive use of some TCs and TCIs have been shown to prolong AD remission, however, these agents are applied only to sites of predilection and not diffusely to atopic skin which is known to be impaired even when AD is quiescent.12,26,27Current recommendations for AD management based on both experience and some clinical trials recognize that moisturizer application increases skin hydration, decreases TEWL, reduces clinical signs (ie, erythema, scaling, fissuring) and pruritus of AD, can decrease topical prescription anti-inflammatory therapy required, and may lessen the frequency of AD flares.12,26,27,56-59Gentle, non-alkaline soap-free cleansers, preferably devoid of fragrances, along with rational bathing practices, are important when cleansing atopic skin.12,27 There are a wide range of moisturizer and barrier repair formulations in the marketplace used to treat xerotic and atopic skin. Conventional moisturizers primarily contain occlusive agents and humectants which reduce TEWL and increase SC hydration.12,60 Other formulations additionally incorporate ingredients designed to support SC functional and structural integrity, such as ceramides, pseudoceramides, niacinamide, shea butter, sphingosine, FLGdegradation products, and specific oils.12,57,60-62Current information on AD pathophysiology suggesting the altered cutaneous microbiome in atopic skin and the increase in staphylococcal predominance with reduction in overall microbial diversity noted with AD flares has led to further research in moisturizer development. There are data in patients with moderate AD (N=60) supporting that a fragrance-free moisturizer