InstaLift suture and cones are composed of 18% PLGA and 82% poly-L PLLA, so the device is entirely resorbable, and the cones are bidirectionally oriented (Figure 1). Further increasing the utility of this treatment, the FDA issued an update to the Silhouette InstaLift label in June 2017, modifying instructions for placement by making the use of a permanent monofilament suture to secure the suspension suture to the fascia optional, thereby making instructions more consistent with clinical practice. While InstaLift is FDA approved exclusively for use in the mid-face,10 successful results can be achieved in the jowl/jawline and neck areas as well.Along with approval of these sutures comes a need to properly define the optimal technique so that patient experience is consistently positive. In this report, the authors emphasize the importance of patient selection and straight-line vector planning (SLVP) and provide a detailed description of optimal technique for areas from the malar eminence to jowl/jawline, as well as special considerations for off-label treatment in the neck.As part of a holistic approach to facial rejuvenation that includes relaxation with neuromodulators, revolumization with injectable agents, resurfacing with energy-based treatments or cosmeceuticals, and repositioning,11 Silhouette InstaLift offers a non-surgical approach that can effectively reposition descended tissue and tighten those facial features most susceptible to sagging. Recovery time is minimal, and results may be appreciated immediately. Furthermore, the cones and sutures are not only completely resorbable, but provide added benefit through the documented collagen-stimulating abilities of PLLA and PLGA.12-13 For comparison, three 8-coned InstaLift sutures contain the same amount of PLLA as one vial of Sculptra (Sculptra Aesthetics, Galaderma Laboratories, Fort Worth, TX.).14 This biostimulatory property allows the sutures to also address age-related volume loss, offering another mode by which repositioning with this particular product can yield optimal results.15

Patient SelectionAs with any medical procedure, proper patient selection is key to obtaining optimal outcomes. When evaluating a patient for potential treatment with absorbable suspension sutures, it is important to remember that this medical device, along with all other non-invasive/minimally invasive techniques, is not a substitute for the traditional surgical facelift often required in older patients with significant skin laxity/skin excess and advanced signs of facial aging. Rather, absorbable suspension sutures are best suited for patients with early to moderate aging changes and without significant skin laxity, loss of elasticity, excessive fibrosis, excessively thick skin, or sun damage.11 It is important that patient tissue can be mobilized during examination and that underlying bony projections are strong. Absorbable for secondary improvements in patients who have previously undergone an open facelift and may be combined with other rejuvenating treatments such as dermal fillers, botulinum toxin, and energy-based devices for a synergistic approach to facial restoration.11 Though the Silhouette InstaLift material is entirely absorbable, sutures may not be the optimal technique in very thin patients, where cones and knots may initially be palpable or even visible. Absorbable suspension sutures are not indicated in patients who are significantly overweight or have very thick non-compliant skin.Straight-Line Vector PlanningLifting the tissues along the appropriate vectors is of paramount importance for a successful outcome. Sutures should be placed in the subcutaneous layer as straight lines. Placement of sutures in a curved pattern, a “U,” or “V” shape undermines the design of the device, and not only guarantees poor results, including puckering and uneven lifting, but is tantamount to ensuring suture displacement following the procedure. For absorbable suspension sutures, there is no single anchor; rather, the cones 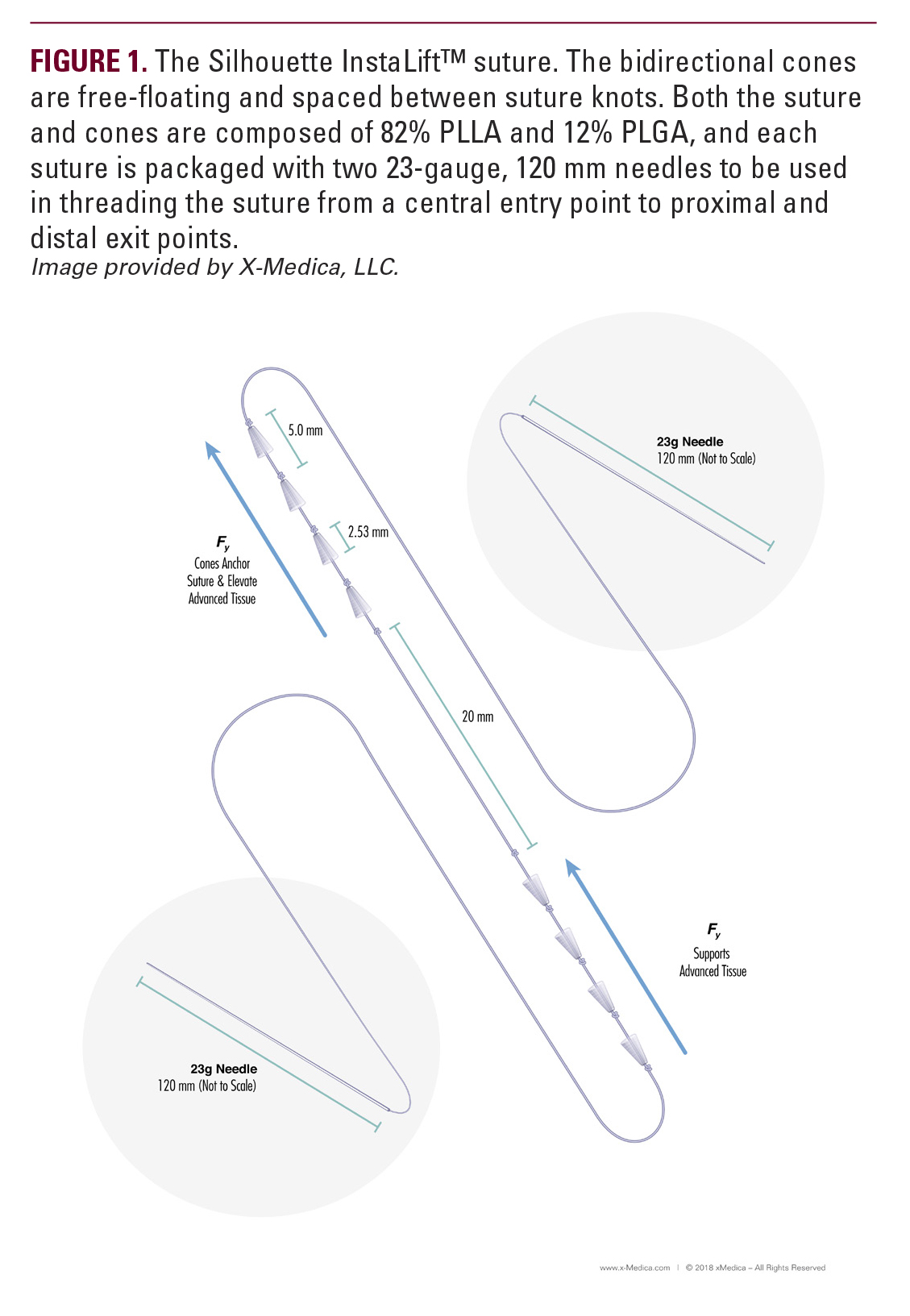 in the upper part of the suture are placed in less mobile and more fibrous and adherent tissue (eg, subcutaneous tissue superior-lateral to the zygomatic ligament) where they serve as an anchor so that sagging tissue may be advanced over the lower cones. The bidirectional cones act in concert to keep both the suture and advanced tissue in place, but can only do so if the cones emanating from the center of the suture are pointed in opposite directions so that they may act in direct opposition to one another. Furthermore, in order to maximize the additive capacity of the cones to provide lift to the advanced tissues, each of the cones on each side of the suture (ie, the superior side, which serves as an “anchor,” and the inferior side, which serves to support advanced tissue from the point of action to the midpoint of the suture) must lie along a single straight-line vector. Therefore, optimal planning must begin with the assumption that the suture will be placed in a straight line.Vector PlacementTo best counteract aging effects, vectors must be placed perpendicular to the plane they are intended to elevate. This recommendation is based not only on the clinical experience of the authors, but in basic scientific principles as well. While the clinical reasons for exclusively placing the sutures in a straight line are covered above, here the authors present the scientific basis for placing the vectors perpendicular to the plane they are intended to lift.Both force and the direction of motion may be represented by vectors. By aligning the soft-tissue structure to be elevated with the x-axis, one may calculate the percentage of total force applied by a suture placed at any given angle in both the X and Y direction (by determining values for component vectors Fx and Fy). When placing the suture directly along the y-axis, at a 90° angle to the x-axis, we are eliminating the need for the suture to exert force in any direction other than up through the y-axis, thus maximizing the force and efficiency of the lift (Figure 2A). Mathematically: Fy=F*sinθ, or 1*(sin 45°)=0.71. Thus, 71% of the total force applied acts in the y-direction, (remember, the y-axis is the desired direction of lift). Therefore, when placing a suture at a 45° angle, the force provided by the suture that is actually lifting the tissue in the right direction is diluted by more than one third (Figure 2B). When placing sutures, it is important to maximize the work done by the device in the desired direction of lift by placing the suture at a 90° angle to the plane to be elevated with the point of action (inferior-most suture exit point), on the x-axis.For example, to correct sagging of the nasolabial crease, the suture should be placed perpendicular to this feature (Figure 3A). As discussed above, vectors placed at angles not equal to 90° provide suboptimal support (Figure 3B). This principal also holds true for suture placement in the neck, where the x-axis is routinely overlying the medial border of the platysma muscle and is defined by the medial extent of the neck’s redundancy. The suture is placed at a 90° angle to this plane, in accordance to the SLVP principles. For the jowl and jawline, identification of the optimal vector of correction is less straightforward. Unlike the nasolabial fold, where the plane of elevation is also the facial feature identified as sagging, the jawline itself should not be viewed as the plane to be elevated. Rather, both the direction of gravitational force and the direction of tissue descent due to volume loss should be taken into account. The x-axis should be placed so that it transects the encircled jowl at an angle perpendicular to the direction of descent (Figure 4). The vector should then be planned with its point of action at the center of this circle and the vector placed at a 90° angle to the x-axis, or plane of elevation.Suture PlacementSuture placement is a sterile procedure. Treatment areas are prepped and draped in routine sterile fashion. The number of sutures is dictated by the degree and distribution of lift required. One entry site and two exit sites are marked for each suture,16 according to the vectors chosen, beginning with the inferior exit points (points of action), then measuring along the planned vector line to mark the center entry point and most 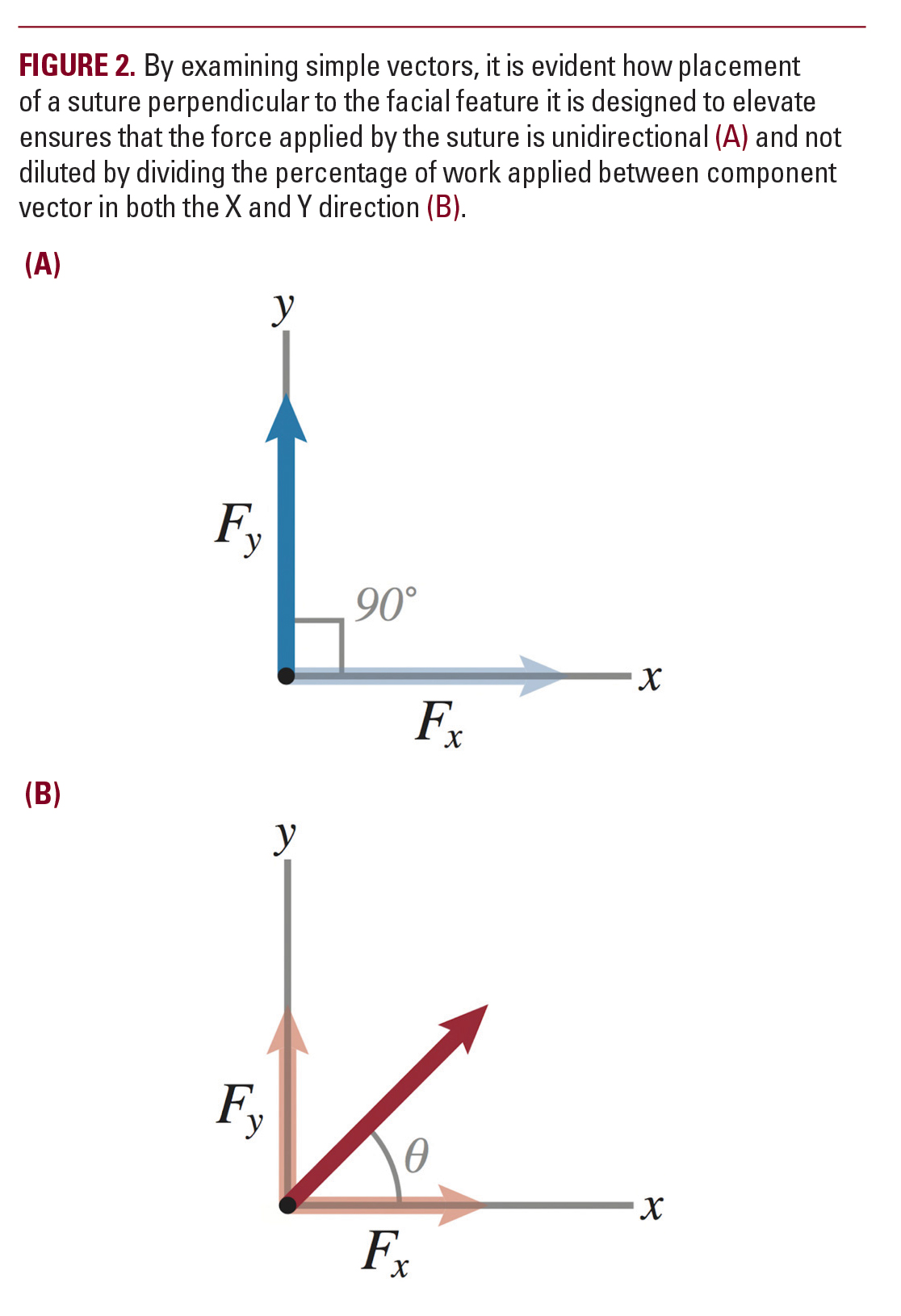