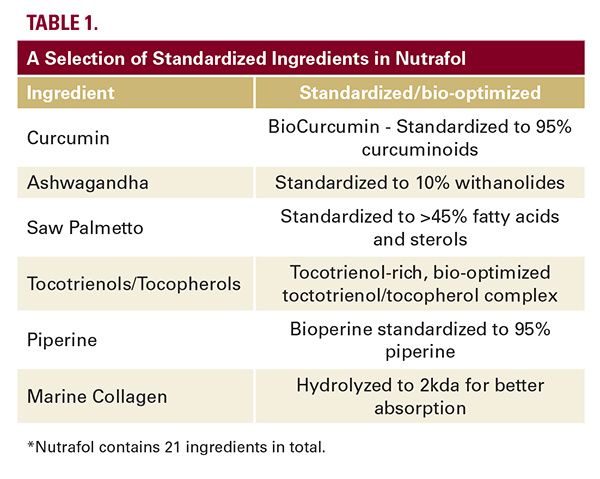 Ayurvedic medicine, curcumin has been used for centuries to treat health conditions including respiratory illnesses, liver disease, and inflammatory disorders.26 Curcumin is a highly pleiotropic molecule that modulates the activity of enzymes, growth factors, and numerous signaling pathways.27 As such, curcumin has a diverse pharmacologic profile functioning as an anti-inflammatory, antioxidant, anti-carcinogenic, anti-diabetic, anti-coagulant, anti-microbial, hepatoprotective, and cardioprotective agent with additional anti-aging properties.Curcumin is most recognized as a potent anti-inflammatory and immunomodulator,28 and as such it provides a potential option to counter the inflammatory component of hair loss, without the usual side effects of most anti-inflammatory and immunomodulatory drugs. Curcumin down-regulates inflammatory pathways including cyclooxygenase-2 (COX-2), lipoxygenase, and inducible nitric oxide synthatase (iNOS) enzymes. Curcumin inhibits transcription factor NF-kB decreasing the pro-apoptotic inflammatory cytokines TNF-α and interleukin 1 that cause follicular regression. In addition to functioning as an anti-inflammatory, curcumin has broad antioxidant activity. It is a dual antioxidant meaning it is a scavenger of free radicals and capable of boosting endogenous antioxidant levels. Curcumin up-regulates transcription factor nuclear factor erythroid-like-2 (Nrf-2).29 Nrf-2 increases the synthesis of enzymatic antioxidants such as hemoxygenase 1 and glutathione increasing cellular antioxidant defense.Curcumin was also shown to be a naturally occurring anti-androgen.30-32 Studies on prostate cancer cell lines demonstrate that curcumin inhibits aberrant androgen receptor (AR) expression.30,31 The AR plays an important role in the control of hair growth and is also overexpressed in follicles affected by androgenetic alopecia. In vitro models of androgenic alopecia have also shown isolates of turmeric and curcumin to have effects against 5-a reductase (5-aR) 32 supported by clinical data from topical studies.33,34 Perhaps the most interesting and valuable effect of curcumin in the androgen pathway is its demonstrated capacity to stabilize aberrant androgen-induced downstream TGF-b signaling that in follicles induces catagen, hair growth inhibition, and perifollicular fibrosis.27,31,35Stress-induced perifollicular mast cell activation and degranulation plays a key role in stress-triggered inflammatory events in hair loss via the cytokines and mediators released.36 Mast cell stabilization seems to be a promising approach to skin conditions induced and aggravated by stress, but little is available pharmacologically.36,37 Evidence shows that curcumin is a natural mast cell stabilizer, and was recently shown to inhibit Substance P-triggered activation and degranulation of connective tissue type mast cells - suggesting its potential use for stress-induced neurogenic inflammation.38,39 Further, curcumin was shown to decrease levels of SP in animal stress/pain models, and in a recent human study this correlated locally with decreased skin itching.40,41Although the biologic activity of curcumin is well defined, its use is limited by poor absorption and rapid metabolism resulting in limited bioavailability42. The amount that is absorbed is converted to dihydrocurcumin and tetrahydrocurcumin that are further converted to monoglucuronide conjugates in the liver and intestines.43 Studies have demonstrated that co-administration of curcumin and the botanical piperine, found in black pepper (Piper nigrum) and long pepper (Piper longa), increases the bioavailability of curcumin. Piperine inhibits the enzyme responsible for glucuronidation and can increase plasma levels up to 154% after ingestion of high dose curcumin (2000mg/kg).44 A novel approach for increasing bioavailability of curcumin is to standardize it to higher percentage curcuminoids and to reconstitute it with non-curcuminoid oil components of turmeric.45 In a comparative study, a patented formulation (BCM-95®CG) containing 95% standardized curcumin and non-curcuminoid components was found to have approximately 700% better absorption than curcumin alone or a curcumin-lecithin-piperine formulation.45 Human clinical trials supplementing with this formulation have shown curcumin to significantly reduce inflammatory biomarkers like CRP and ESR.27,46Ashwaghandha: Withania somniferaAshwaghandha, also known as Indian Ginseng or Wild Cherry, is a botanical with a broad range of biologic effects. It has been used for centuries in Ayuvedic medicine to bring the body in balance, build energy and resistance to stress.47 Valued for these properties, ashwaghandha is considered an adaptogen: a group of botanicals that when taken daily leads to homeostasis, stabilization, and a greater ability to resist and recover from stress. Elevated stress and cortisol levels have been recently shown