quisition of benign facial neoplasms, textural irregularities, and intrinsic structural changes. Moreover, there are facial structural differences among different ethnic groups that influence the aging process. In Figures 1a and 1b, Alexis and Alam highlight the differences in facial architecture of aged Caucasian, African American, Latino, and Asian women from frontal and lateral views.7 While wide individual variability within populations is expected and broad generalizations about specific population groups should be used with caution, nuances in facial anatomic structure and manifestations of skin aging have been described in published studies.

Skin aging among African Americans tends to be most striking in the midface. Published descriptions of common facial anatomic features among African Americans include a hypoplastic malar eminence, increased soft tissue in the midface, and more ocular proptosis.7,8 With aging, the malar fat pads descend toward the nasolabial folds resulting in lengthening of the lower eyelids, more pronounced nasolabial folds, and accentuated nasal jugal folds (Figure 2).7,8 These changes ultimately lead to a double convexity of the midface. Additionally, dermatochalasis of the upper lid is often seen, which can be attributed to pseudoherniation of the medial orbital fat pad into an eyelid space that is on average smaller in African Americans than Caucasians. Mattory and colleagues found that the distance between the upper eyelid crease and lid margin is 6 to 8 mm in African Americans compared to 8 to 10 mm in Caucasians.9 These anatomic differences in combination with increased ocular proptosis also contribute to the presence of infraorbital shadowing.8 Perioral rhytides and loss of lip volume are prominent changes with aging seen in Caucasians that are less common, of lower severity, and delayed in onset among African Americans. Dermatosis papulosa nigra (DPN) is a common facial neoplasm and sign of aging in black individuals. Lesions are 1- to 3-mm at or pedunculated papules. Although benign, they represent a frequent cosmetic concern in black patients.

Cutaneous manifestations of photoaging in the Asian population are well documented in the literature. In East and Southeast Asians, pigmentary changes predominate. These changes include actinic lentigines, pigmented seborrheic keratoses, and 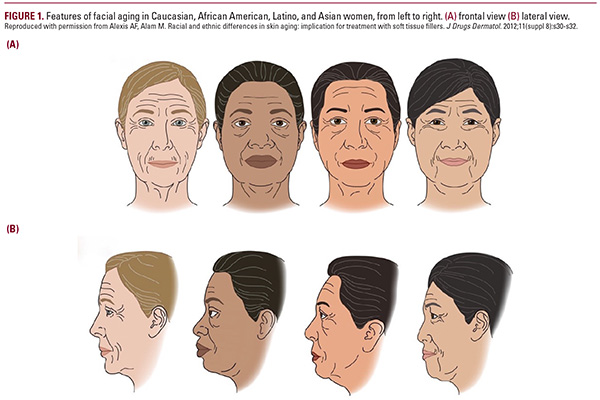