A 62-year-old Caucasian female presented with a tender, erythematous to violaceous nodular eruption for 4 weeks (Figure 1). She concomitantly reported abdominal discomfort, lower back pain, fatigue, and anorexia. Laboratory results upon initial presentation revealed acute kidney injury and she was admitted for further workup. At that time she demonstrated marked leukocytosis with blasts, eosinophilia, basophilia, and increased lactate dehydrogenase. A retroperitoneal ultrasound revealed retroperitoneal lymphadenopathy and a diffusely enlarged uterus with fluid collection.
The patient underwent an endometrial biopsy, skin biopsy, and bone marrow biopsy. A bone marrow aspirate demonstrated 70% cellular marrow, 65% of which was in blast form in a diffuse interstitial pattern, hypercellularity with large blasts, and markedly decreased hematopoietic elements. Flow cytometry of the aspirate showed the atypical cells to be CD38/CD2+ with interpretation as large cell neoplasm, favoring a plasmacytic etiology. Skin and endometrial biopsies demonstrated atypical leukocytes with a plasmacytic origin, which were similar to those found in the bone marrow aspirate.
Treatment was initiated with bortezomib, doxorubicin, vincristine, lenalidomide and dexamethasone, and hemodialysis three times weekly, and although initially promising, the patient deteriorated and expired about 43 days after initial presentation. Further cytogenetic testing was not obtained prior to her demise.
Plasma cell leukemia (PCL) is a rare variant of multiple myeloma (MM), a monoclonal gammopathy, the current pathophysiology of which is not yet well understood. Our patient presented atypically with the presence of leukemia cutis, involvement of endometrium but the absence of bone pain or organomegaly. PCL may have extramedullary involvement, but cutaneous involvement as an initial presentation has only been described very sporadically in the literature.1
Cutaneous involvement of plasma cell dyscrasias typically occurs after chemotherapy, particularly thalidomide or stem cell transplantation, and more often in MM with later diagnosis of plasma cell leukemia rather than the initial presentation.2 The other described cases of cutaneous involvement of PCL often describe violaceous to hemorrhagic tender, infiltrated deep-set papules and nodules. Leukemia cutis is a much more commonly observed phenomenon in lymphocytic leukemias, which is a poor prognostic factor with a one-year survival rate of 12%.3 Subcutaneous plasmacytoma growth has been hypothesized to be a result of transformation of the adhesion molecules LFA-1 and ICAM-1 at some point during disease course, facilitating plasma cell migration from the bone marrow towards extra- 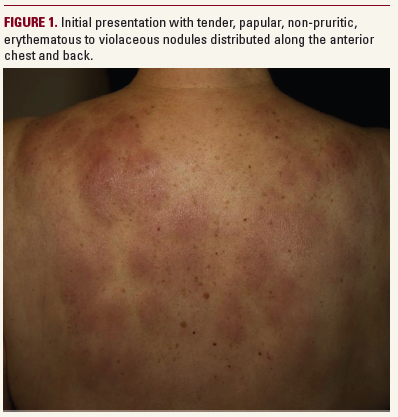