Atopic dermatitis (AD) is characterized by defects in the epidermal barrier and cutaneous inflammation. Moisturizers are the cornerstone of management of AD. However, there is little evidence to recommend the use of one moisturizer over another. Because most patients in our institution cannot afford most commercial moisturizers, we are always in search of possible cheaper alternatives. Moisturizers may be categorized as occlusives, humectants or emollients. One of the best occlusive ingredients currently available is mineral oil, which also confers an emollient effect. Virgin coconut oil (VCO) has been shown to decrease transepidermal water loss (TEWL), and has emolliene, anti-inflammatory, and anti-bacterial properties. No trials have been reported on the use of VCO specifically for pediatric AD, the population that carries most of the burden of this disease. This study is also significant because it uses objective physiologic measurements (TEWL and skin capacitance) to determine efficacy, in addition to measuring clinical improvement. These parameters were not measured in previous studies on VCO for atopic dermatitis. Because AD is known to be the first manifesting disorder in the atopic triad (AD, asthma, allergic rhinitis), a phenomenon called the "atopic march", and it is reported that half of the patients with atopic dermatitis subsequently develop asthma, there is a need for prompt recognition and intervention of AD if it arises in early age. This may improve outcomes with respect to the clinical course of AD and may prevent the development of asthma and, allergic rhinitis. 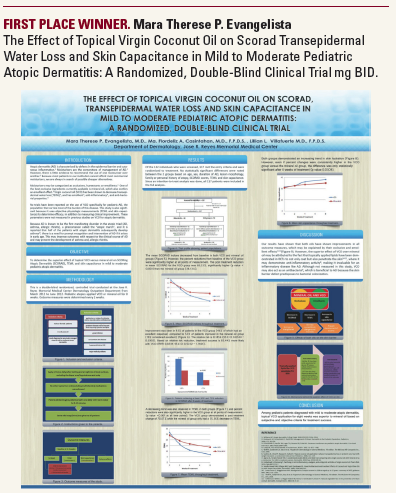 Among pediatric patients diagnosed with mild to moderate atopic dermatitis, topical VCO application for eight weeks was superior to mineral oil based on subjective and objective criteria for treatment success.

Do areas of amelanotic vitiligo affected skin exhibit differential photosentivities as evidenced by differential MED values compared to unaffected skin? How do the MEDs of vitiligo-affected skin vary across baseline phototypes? In vitiligo-affected skin, non-melanin photoprotectants are the only defense against UVR. While it is known that subjects with different phototypes require different dosages of UVR to cause erythema, it is not known if different phototypes differ in their sun sensitivity independent of melanin. By measuring and comparing the MEDs with ultraviolet B radiation in areas of vitiliginous skin and unaffected skin, we will be able to compare the MED in vitiliginous skin of people of different phototypes. Our preliminary results (n=19) show a trend of higher MEDs in vitiligo skin of baseline Fitzpatrick skin type IV-VI (35mj/cm2) as compared to lower MEDs in the vitiligo skin of those participants with baseline type I-III skin (20mj/cm2.) Although this data is preliminary and further analysis needs to be conducted, the trend suggests that melanin independent photoprotectants play an important role in photoprotection. These factors are postulated to include Stratum corneum, epidermal thickness, beta carotene, enzyme systems, urocanic acid, and DNA repair enzymes.