Radiation therapy is a commonly used and clinically important treatment for a variety of malignancies. The limiting factor in radiation treatment is often skin tolerance, as radiation injury to healthy skin is a frequent complication.1 Although it is not the primary therapeutic target, the skin undergoes molecular, gross, and functional changes as a result of radiation therapy,2-4 resulting in adverse events. Radiation confers significant, dose-dependent acute and chronic cutaneous sequelae,1,5 including erythema, desquamation, ulceration, alopecia, decreased skin elasticity, thickened and fibrotic skin,1 and delayed wound healing.6 These cutaneous side effects are painful, aesthetically unpleasant, affect quality of life, and may influence treatment adherence, tolerance, and schedule.5,7

The Scope of Dermatologic Side Effects in Oncologic Therapies

Cancer treatment confers a plethora of toxicities and affects most organ systems. Oncologic therapy targets rapidly dividing cells, and because the skin is characterized by rapid cell proliferation, it is often affected by such treatment.3 With the development of new oncologic therapeutic strategies, the scope of dermatologic side effects has evolved: greater than 50 cutaneous side effects are associated with more than 30 anti-cancer drugs. Such side effects include chemotherapy-induced alopecia, acral erythema, subungual hemorrhages, and other nail toxicities, erythema multiforme, and radiation dermatitis, among others.8 Additionally, the development of targeted anti-cancer medications has elicited class-specific cutaneous toxicities. For example, epidermal growth factor receptor (EGFR) inhibitors cause cutaneous side effects in 50% to 90% of patients.9 Most commonly, EGFR inhibitors induce a papulopustular eruption, as well as xerosis cutis, hyperpigmentation, hair and nail changes,9 and augmentation of radiation dermatitis symptoms.10,11
Radiation dermatitis is a well-established entity in the medical literature. It was first detailed in 1896 in the British Medical Journal, which published one of the earliest reports of the cutaneous side effects of ionizing radiation presenting on the hands. Radiation dermatitis continues to be a common side effect of radiation exposure today: as many as 90% of patients treated for breast or head and neck cancers demonstrate symptoms of acute radiation dermatitis.8,12

Ionizing radiation incites a cascade of molecular events with subsequent development of radiation dermatitis symptoms. The pathophysiology is multifactorial, and includes the generation of reactive oxygen species and cytokine release (Figure 1). 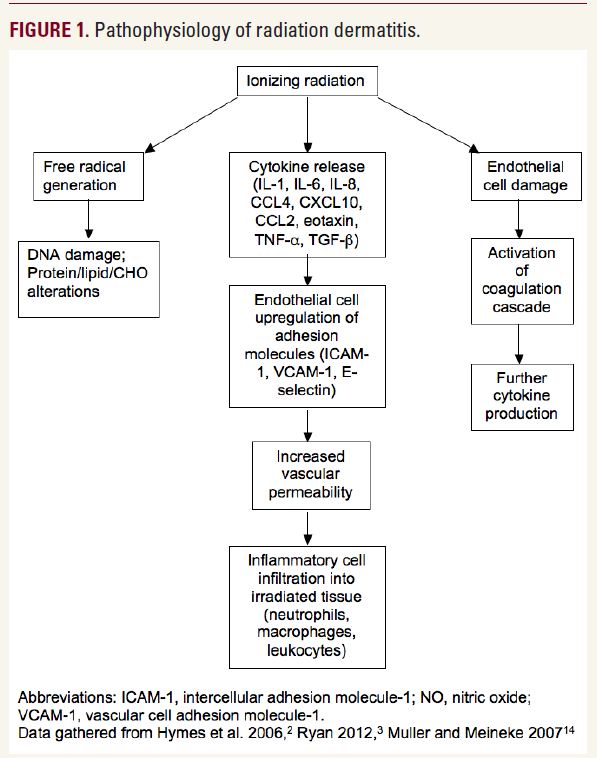 Ionizing radiation induces a burst of free radicals which react with intracellular components, ultimately causing alterations in lipids, proteins and carbohydrates, as well as DNA damage.4,13 Irradiated cells are stimulated to release a variety of cytokines, which activate an inflammatory cascade.14 Cytokine expression begins immediately following irradiation and is maintained for months, and even years, until late pathologic findings and chronic radiation dermatitis symptoms are clinically apparent.14,15 Implicated cytokines include IL-1, IL-6, IL-8, CCL4, CXCL10, CCL2, eotaxin, tumor necrosis factor- (TNF) α, and transforming growth factor- (TGF) β.3,14
Cytokine release results in increased vascular permeability, permitting activated inflammatory cells to extravasate from the vasculature and migrate into irradiated tissue.14 This influx of inflammatory cells and specifically, macrophages,1,14 is a hallmark of radiation-induced cutaneous damage3 and results in clinically apparent inflammation and erythema that can manifest within hours of exposure.2 The coagulation system becomes activated secondary to radiation-induced endothelial damage; this further promotes the inflammatory reaction with additional cytokine production.2 Additionally, radiation decreases, in a dose-dependent manner, nitric oxide (NO) synthesis,6 an important regulator of immune function and wound healing. The combined effect