A Randomized, Double-Blind, Placebo-Controlled, Pilot Study to Assess the Efficacy and Safety of Clindamycin 1.2% and Tretinoin 0.025% Combination Gel for the Treatment of Acne Rosacea Over 12 Weeks 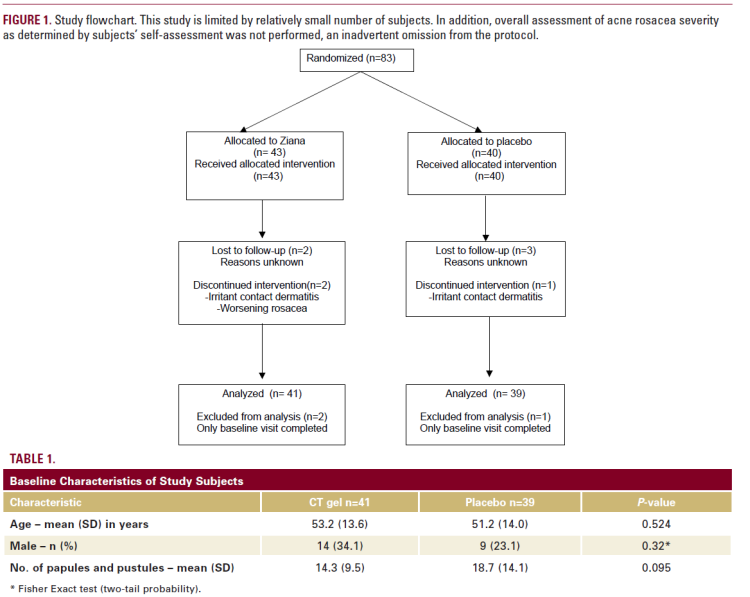 Eighty-three subjects enrolled in the study, with 43 subjects allocated to CT group and 40 to placebo group (Figure 1). The average age of the study subjects was in the early 50s and about two-thirds of the subjects were female. As indicated in Table 1, there were no statistically significant differences at baseline between the CT and placebo groups with regard to age and sex distribution. Similarly, there was no difference in rosacea disease severity as measured by papule/pustule count at baseline.
Of the 83 study subjects enrolled, 73 subjects (88%) completed all study visits. In the CT group there was one early termination due to irritation from CT gel, and one due to worsening rosacea. In the placebo group, one subject withdrew participation because of irritant dermatitis. One subject in the CT group was lost to follow-up, while two subjects in the placebo group were lost to follow-up, for unknown reasons. Three patients were excluded from the mITT analysis because they did not complete at least one follow-up visit.

As indicated in Table 2, there were no significant differences in absolute papule/pustule count after 12 weeks in either the CT (P=0.63) or placebo groups (P=0.15). The percentage of sub-