After eight weeks of application, all the nine skin parameters were significantly improved versus baseline (P<0.05; paired Student's t test) on the THPE-treated side (data not shown). Compared to placebo, the THPE-containing product significantly lifted the skin and improved skin elasticity (P<0.05; paired Student's t test).
These observations evidenced a more global anti-ageing property of the THPE product over time. Figure 3 shows an example of change observed on the nasolabial fold and the jaw line. 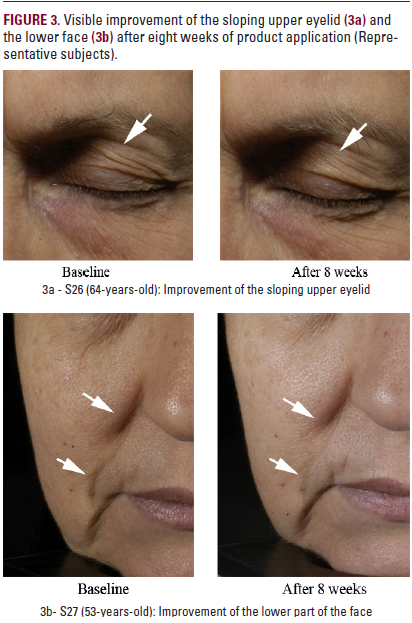 The loss of skin elasticity and firmness negatively influences self-perception and self-esteem since the entire shape of the face is affected. This paper describes the results of a double-blind, randomized, placebo-controlled clinical study performed on healthy Caucasian women to assess the immediate and long term benefits of a THPE-containing cream on their facial appearance. A trained clinical expert blindly evaluated the facial skin features clinically and reported them on analogical visual grading scales. The accuracy and the reproducibility of facethe observer to evaluate the skin facial attributes were initially validated and a good agreement was found with other experts (data not shown). The clinical evaluation was preferred to any instrumental measurement in order to focus on changes that can be perceived by a human observer, visible benefits being more relevant from a consumer point of view. An objective method such as the 3D fringe projection would have enabled to capture the shape transformations, but the documented changes may not have been related to the human perception. Moreover, such a method would not have properly documented the improvement related to the skin tone.
Previous in vitro and in vivo studies have demonstrated that THPE induces keratinocyte contraction and increases skin firmness.7 Thus, the expected clinical benefit was a lifting effect of the skin. Several articles have already demonstrated the benefits of cosmetics formulation on wrinkles.8, 9 However, to the best of our knowledge, very few double-blind, placebo controlled studies investigating the benefits of an active ingredient against skin sagging have been published. Most of the cosmetic products which claim a lifting benefit rely on the tensioning properties of a polymer topically applied on the skin2,3 to form a tightening film. Thus, lifting products generally deliver an immediate benefit, however there is no long-term efficacy. On the contrary, the mechanism of action of THPE relies on the contractile ability of the cells, which may result in a more natural, physiologic and lasting effect. This clinical study revealed that the contractile effect which occurs at a cellular/microscopic level leads to a visible/macroscopic change of the skin appearance.

Our results demonstrate that 45 minutes after application of a 2.5% THPE-containing product on face, we can visually detect a significant improvement of the skin tone and radiance when compared to the placebo. The face is also significantly lifted after four and eight weeks of daily application, this lifting effect being statistically significant on the product side in comparison to the placebo treated side (P<0.05, Student's t test). Moreover, the under-eye wrinkles were significantly reduced compared to the placebo treated side. As the skin surface smoothed out, light reflection was modified: healthy glow and radiance of the skin were significantly improved compared to the placebo treated side (P<0.05, Student's t test). Notably, an eight-week treatment with THPE-containing product provided benefits in all measured parameters. The skin tone was still significantly improved versus baseline, despite the product being applied at least 24 hours before the measurements.
This clinical study demonstrated that a THPE-containing cream significantly improves the skin tone, elasticity and lifts the skin in a perceptible way. This means that visible rejuvenation of the skin appearance can be achieved by modifying the geometry of epidermal layers' cells.