A 54 year old female was evaluated for wound breakdown after breast reconstruction with pedicle transverse rectus abdominal myocutaneous (TRAM) flap. Two years prior to this, the patient underwent a left breast radical mastectomy for invasive ductal breast carcinoma. Sentinel nodes were negative and she was treated with Tamoxifen. One week postoperatively she was treated for a tissue expander infection and underwent multiple debridements along with several courses of antibiotics. The wound was eventually left to heal by secondary intention, which left the patient with a painful disfiguring scar; therefore, she elected to undergo reconstructive surgery.
Two days after left breast reconstructive surgery, the flap was deemed nonviable as there was evidence of wound dehiscence. As the patient became febrile with leukocytosis, antibiotic therapy with vancomycin and levofloxacin was initiated. Subsequent debridements every two days led to further deterioration and expansion of the wound. Large necrotic ulcers with rolled violaceous edges were present over the abdominal wall and left breast (Figure 1). All blood cultures, tissue cultures and stains for AFB were negative. The patient was diagnosed with pyoderma gangrenosum, which was also supported by histopathologic findings of an ulcer demonstrating pseudoepitheliomatous hyperplasia with a dense dermal neutrophilic infiltrate. There was no history of autoimmune disorders, inflammatory bowel disease and peripheral blood flow cytometry did not reveal evidence of a lymphoproliferative disorder.
Wound debridements were discontinued and treatment with pulse steroid therapy was initiated (methylprednisolone 1 gm daily for three days). The patient was treated with tapering doses of prednisone and cyclosporine 300 mg/d, along with daily treatments of hyperbaric oxygen. Once the disease was controlled, skin grafting was offered to the patient; however, she declined further surgical intervention. To hasten wound healing, the use of meshed tissue-engineered skin (Apligraf; Organogenesis Inc., Canton, Mass), a total of 16 pieces, was applied to the wound beds with an overlying silicone-based dressing (Mepitel; SCA Molnlycke Ltd, Goteborg, Sweden), ABD pads and an abdominal binder. Slow improvement was 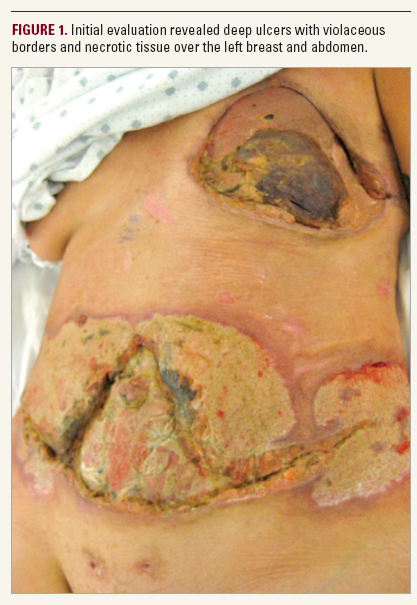