An Open-label, Pilot Study to Assess the Effectiveness and Safety of Hyaluronic Acid Gel in the Restoration of Soft Tissue Fullness of the Lips

Lip augmentation is a frequently requested aesthetic procedure and one in growing demand as patients seek to reverse age-related lip thinning or enhance lip thickness in the pursuit of current standards of attractiveness. Wider and fuller lips are often perceived as a mark of youthfulness and female beauty.1–3 Patients may also seek to reverse the diminishing attractiveness of the perioral area that occurs as a consequence of age-related tissue weakening and volume loss, exacerbated by extrinsic factors such as sun exposure, repetitive facial movement and smoking. Contributing to the growing demand for lip augmentation is the recent availability of hyaluronic acid (HA) dermal fillers. These agents offer several advantages for lip augmentation over permanent fillers, autologous fat or collagen-based fillers. They are non-immunogenic and last longer in the skin than collagen fillers but are not permanent; thus, they obviate concerns about the long-term presence of foreign substances in the skin. Their effects can easily be reversed.4–6
Aesthetic dermatologists have anecdotally reported the successful use of HA dermal fillers in lip augmentation,7,8 but there have been few if any systematic studies of the effectiveness, safety and tolerability of this practice. This report describes a prospective pilot study conducted at two centers in Canada with a small gel particle hyaluronic acid filler Restylane® Injectable Gel (SGP-HA; Medicis Aesthetics Inc., Scottsdale, AZ) in patients seeking lip augmentation. The primary objective of the study was to evaluate the effectiveness and safety of SGP-HA in lip augmentation. Effectiveness was assessed by an independent evaluator using an industrydeveloped scale, the Medicis Lip Fullness Scale (MLFS). A secondary objective was to investigate the clinical relevance of changes measured using this instrument by comparing it with the Global Aesthetic Improvement Scale (GAIS), a subjective clinician- and patient-rated measure.

This study was approved by the Institutional Review Board, performed in accordance with the ethical guidelines of the 1975 Declaration of Helsinki, and conducted in compliance with good clinical practices including independent quality assurance and archiving of essential documents. All patients gave informed consent to participate.
Enrollment
The open-label study enrolled 21 adults, 18–65 years of age, seeking lip augmentation at two investigational centers in Canada. Eligibility criteria were determined and informed consent was obtained at the screening visit. To participate, patients must have had MLFS scores of 1, 2 or 3 (very thin, thin or medium) for both the upper and lower lips, as assessed by the treating investigator, the blinded evaluator and the patient. Among the exclusion criteria were the presence of disease or a recent surgical or dental procedure that could affect facial contour or edema, known hypersensitivity to SGP-HA, use of any soft-tissue augmentation product in the past eight months, cosmetic surgery or augmentation of the lower face in the prior six months and any contraindications to the cosmetic procedure.
Treatment
For convenience, patients may have been screened and treated on the same visit. Treatment must have occurred within 21 days after screening (Figure 1). Commercial SGP-HA supplies were used for this study. One dermatologist and one plastic surgeon, one at each participating center, administered the treatment using the recommended technique of linear antegrade injection for the vermilion border from lateral to medial, vertical puncture and depot injections for the body of the lip. In all patients, both lips were treated to achieve the optimal lip augmentation agreed upon between the physician and patient prior to the procedure. The recommended maximum dose was 1.5 mL per lip. Patients were permitted to receive a touch-up injection at two weeks to achieve optimal cosmetic enhancement.
Assessment of Effectiveness
Canfield photographic 2D images were obtained at the screening visit to document the baseline condition of the lips. Patients were treated at week 0 and returned to the clinic for assessment of treatment effects at weeks 2, 4, 8 and 12. For patients who received a touch-up injection, the second treatment visit was counted as week 0 for purposes of the assessment of treatment effect. On each pre- and post-treatment visit, the upper and lower lips were evaluated by the patient, treating investigator, and blinded evaluator using the MLFS. The blinded evaluator was a clinician at each of the investigational centers who was not involved in the patient's treatment and was unaware of the volume of SGP-HA administered.
The MLFS consists of separate 5-point numeric grading scales for the upper and lower lip. Scores range from 1 (very thin) to 5 (very full; Table 1). The MLFS was validated in a previous investigation (Kane et al., unpublished data), which showed moderate to substantial inter-rater reliability (weighted Kappa range 0.60–0.83) and high intra-rater reliability (weighted Kappa of 0.81) in comparisons of test photographs. The MLFS was determined to be a suitable tool for use in grading lip fullness in clinical trials. In the present study, the primary outcome, treatment success, was defined as an increase of one point or more on the MLFS for both upper and lower lips at eight weeks posttreatment, as rated by the blinded evaluator. 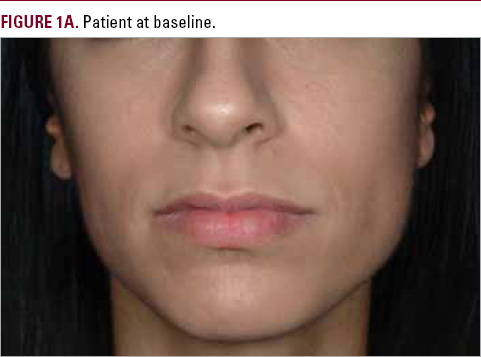 Cosmetic improvement from baseline was measured using the GAIS, which is a subjective 5-point scale used to rate a change from baseline as very much improved, moderately improved, somewhat improved, no change or worse.9 The blinded evaluator, the treating investigator and the patient completed the GAIS at each study visit. Baseline photographic images could be reviewed as a reminder of the patient's pretreatment appearance.