An African-American female, aged 27 years, presented to the dermatology clinic for a follow-up evaluation of multiple pruritic, darkly pigmented papules on the face, ears, chest, abdomen, back, upper extremities, and lower extremities. She was referred from the gastroenterology clinic where she was receiving treatment for primary sclerosing cholangitis (PSC).
The patient had been seen approximately eight months previously by dermatology as an in-patient consult for this same complaint. At that time, the patient was admitted to the hospital for acute pancreatitis, cholecystitis, and eosinophilia due to underlying PSC. A shave biopsy of one of the characteristic skin lesions was read as lichen spinulosis. Phyrynoderma was also entertained due to a low serum level of vitamin A (15 µg per dL). After a cholecystectomy, the patient was discharged from the hospital on a treatment regimen of ursodiol, lansoprazole, vitamin A supplementation, topical keratolytics, and oral antihistamines.
When the patient was seen several months later, her physical exam revealed over 100, 1 mm to 8mm hyperpigmented, round, perifollicular, and parafollicular papules with some coalescence into plaques. Many papules contained a central keratotic plug. The lesions were most prominent on the extensor surfaces of the legs, but also on the arms, chest, back, abdomen, and a few lesions on the face and ears (Figures 1 and 2). There was no involvement of the palms, soles, or mucous membranes. Icterus of the sclera and of the oral mucosa, especially the sublingual mucosa, was noted. Besides a personal history of PSC, past medical history and family history were non-contributory.
Punch biopsies were taken from two separate lesions on her bilateral lower extremities. The histology of a papule on the right thigh showed a dilated follicular infundibulum with a central keratotic plug. The papule on the left thigh revealed a transepithelial channel lined by an acanthotic and hyperkeratotic epidermis with degenerated follicular contents, elastin, collagen and a granulomatous reaction at the base (Figures 3 and 4). Her clinical lesion distribution, known medical history of PSC, lack of improvement with vitamin A supplementation, and histological analysis favored the diagnosis of a perforating dermatosis.

The disorders of perforation are unique as they represent examples of transepithelial elimination in which altered dermal substances are extruded through epidermal channels. The 4 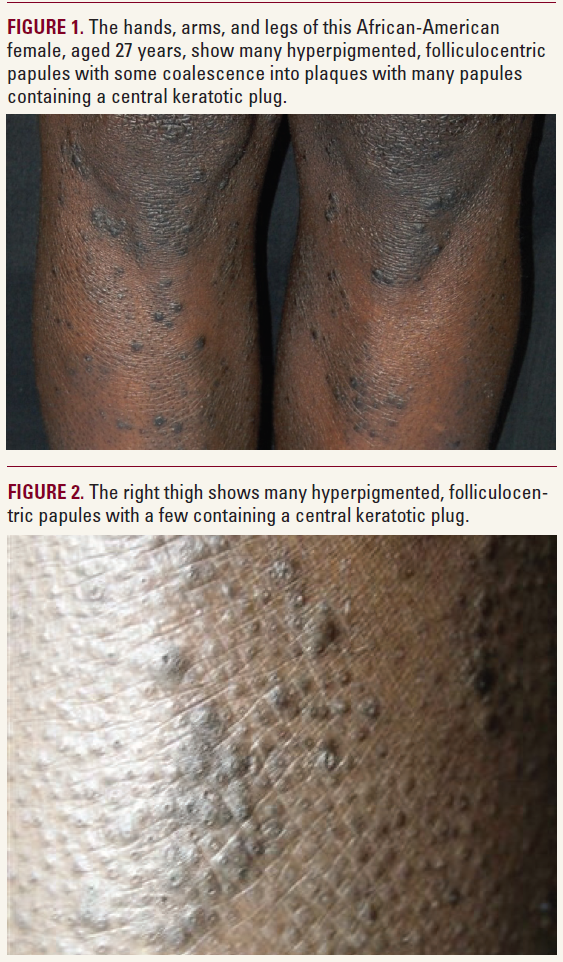 classically described perforating disorders include elastosis perforans serpiginosa (EPS), reactive perforating collagenosis (RPC), perforating folliculitis (PF), and Kyrle's disease (KD). In EPS, the extruded substance is elastin. In RPC, the substance is collagen. In PF, it is degenerated follicular contents, which may contain elastic fibers or collagen. Lastly, in KD, the substance is basophilic debris, which is generally negative for elastic stains.1