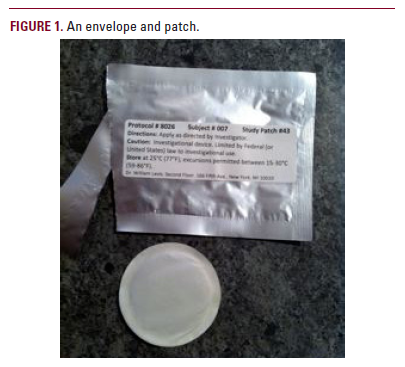 A 26-year-old male was seen for extensive plantar warts on the left foot that were unsuccessfully treated 6 months earlier with liquid nitrogen. On the left first metatarsal (MT) head, the patient had a 30x30 mm mosaic plantar wart. On the left 4th MT, the patient had another mosaic plantar wart measuring 20x5 mm. On the right foot on the second MT head, he had a 5x4 mm plantar wart.
We began treating the 5x4 mm lesion on the right foot. After consulting with the study leader, we also treated the larger wart on the left foot and left the 20x5 mm lesion (left foot) untreated. By week 8, all warts were completely clear including the untreated wart. This patient was also compliant and returned unused patch packages at each visit. This patient came into the office a year post study for another dermatologic problem and his extensive mosaic plantar warts were still clear (Figures 2A, B, C).

A 19-year-old female was seen for plantar warts on the right foot that were resistant to over the counter medications. The largest wart measured 9x9 mm and was treated daily with the study patch. A 2x2 satellite wart was untreated and served as a control. The treated wart showed some regression by the 4th week and was completely clear by week 8. The untreated satellite lesion remained unchanged. This patient was totally compliant and returned used packages at each visit. There were no observable changes in the untreated control.

A 26-year-old female was seen for warts on the dorsal surface of both hands that were resistant to over the counter medications. On visit 1, the left hand wart measured 7x7 mm and was treated with the study patch. The right hand had a wart of 2x2 mm and was left untreated as a control. At week 2, some regression was noted on the treated hand but the untreated hand was unchanged. At week 8, continued regression was noted on the left hand. The left hand wart showed marked improvement with a measurement of 3x3mm. The right hand was still unchanged. At week 10, the left hand was clear and with only slight post inflammatory hyperpigmentation. The control wart on the right hand was unchanged (2x2 mm). This patient was totally compliant and returned used packages at each visit.

The patients treated have had excellent results. Regression begins at 4-5 weeks and continues to improve in the subsequent weeks. This has been the case in all 3 patients who completed the study.
Particularly impressive was the complete and sustained regression of the large plantar mosaic warts that are among the most recalcitrant of all warts. This individual was still clear of warts at one-year post study.