The Infatuation With Biotin Supplementation: Is There Truth Behind Its Rising Popularity? A Comparative Analysis of Clinical Efficacy versus Social Popularity 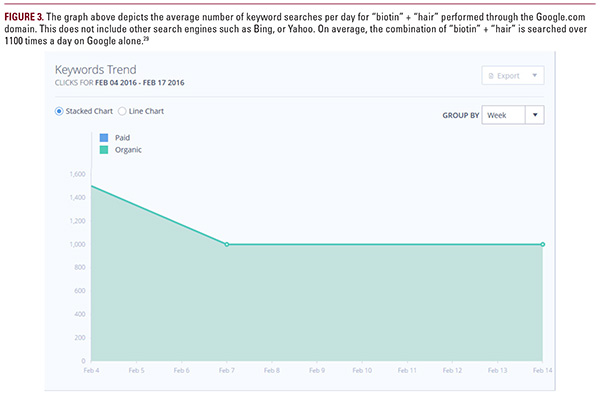 distribution of keyword interest for the keywords “biotin” + hair” (inclusive) that were searched on Google. In addition, welooked at absolute keyword search volumes for “biotin” + “hair” searched through the Google domain (Figure 3). The results are impressive; there was a clearly-defined progressive increase in search interest for “biotin” + “hair” searched on Google each consecutive year for nearly a decade, which dates back almost as far as when data first started to be recorded (Figure 1). Unsurprisingly, the United States also had the highest search interest for “biotin” + “hair” when analyzed based on global geographic search interest distribution (Figure 2). In terms of absolute keyword search volumes, we surveyed an average one week sampling of the average number of keyword searches per day for “biotin” + “hair” performed through the Google.com domain alone; this did not include other search engines such as Bing, or Yahoo. On average, the combination of “biotin” + “hair” is searched over 1,100 times a day on Google alone.What does this all mean? It signifies that societal infatuation with biotin supplementation is not only propagated by its glamorization in popular media, its popularity is vastly disproportionate to the scant clinical evidence supporting its efficacy in hair improvement. In other words, biotin supplements are quite “in vogue”, without there being any significant convincing data to be so.

To Support or To Refute?

The analyses presented above illustrate the unmistakable discord between societal popularity and scientific evidence; infatuation with biotin supplementation is not only propagated by its glamorization in media, its popularity is vastly disproportionate to the scant clinical evidence supporting its efficacy in hair improvement. The authors do not recommend the routine use of biotin supplementation until randomized clinical trials for hair loss demonstrate its efficacy. Clinical trials investigating biotin’s efficacy for the treatment of the most common forms of hair loss such as pattern hair loss (PHL) and chronic telogen effluvium (CTE) of unknown etiology should be performed before any recommendation can be made. In addition, it is unlikely that immune-mediated hair loss such as alopecia areata or cicatrical alopecias would benefit from biotin supplementation. It may be argued that biotin is relatively benign and fairly inexpensive, therefore, “why not recommend it anyway”? However, as physicians, evidence-based practice is paramount, and recommendations should be based on sound scientific data. Although this paper outlines rare circumstances where