NEWS, VIEWS, AND REVIEWS: A Tool for My Laser Practice I Simply Canâ€™t Do Without: Shining a Light on My Favorite Light (Source) 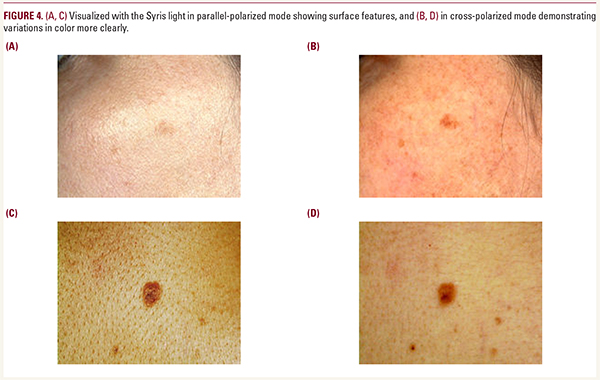 Perhaps the biggest advantage of the Syris light is the ability of cross-polarized visualization to enable visualization of pigmented lesions within areas of the skin where they would normally be hidden, even when viewed with magnification and strong halogen, operating-room lighting. On numerous occasions, I have seen pigmented lesions within darker port-wine stains, severe rosacea (Figure 6), and even within tattoos of all colors, where their visualization would be nearly impossible without using the Syris light (Figure 7). Pigmented lesions are obvious even within skin that is severely inflamed from inflammatory conditions. The ‘odd-duck’ lesion is much easier to identify using the cross-polarizing feature of the Syris light, and one can quickly, in about a second, switch from crosspolarizing, sub-surface viewing to parallel-polarizing, surface visualization with literally a turn of the wrist. This enables one to see the surface epidermal features of a lesion, and quickly transition to sub stratum corneum features, such as pigmentation and vascularity, to enable much faster characterization of the lesion in question. There is, to my knowledge, no other device that enables viewing the epidermal 3-dimensional characteristics of a skin lesion, and then immediately enables cross-polarized viewing of pigment and vascular variations, or in the case of tattoos, allows one to discern even very subtle color characteristics and enables visualization of even very small pigmented lesions within a sea of tattoo pigment, so quickly or over such a large area. In addition, lesions may appear to be ‘odd-ducks’ with the Syris light, and not with the naked eye or even standard magnification. For example, when visualizing a large nevus spilus, a lentigo within it may ‘jump out’ upon cross-polarizing visualization, or areas of darker pigment may be apparent, that were not on standard illumination, even with substantial magnification. Viewing the skin in cross-polarized mode, parallel polarized mode, or anywhere in between is enabled real-time while wearing the light on one’s head, making exams as quick and simple as viewing with the naked eye or a standard illuminator.The Syris light is not FDA-cleared as a diagnostic tool, and new users should use this device to augment their standard exam by using it to identify lesions that otherwise might not get further scrutiny, thus resulting in a closer look with one’s standard techniques, including dermoscopy. I can say without a doubt in my solely laser surgery practice, that using the Syris light has enabled me to identify suspicious lesions requiring further biopsy or treatment in a substantial number of instances, even in patients sent by dermatologists and other practitioners for laser treatment following a skin examination. I have also identified previously unnoticed lesions that require examination,