success was evaluated using a logistic regression using Firthâ€™s Penalized Likelihood, with factor of treatment group (and with factor of age group when comparing the two age groups). For efficacy assessments, multiple imputation was used to impute missing values using the method of Markov Chain Monte Carlo. All statistical analyses were performed using SASÂ® version 9.3 or later. Statistical significance was based upon 2-tailed tests of the null hypothesis resulting in P values of 0.05 or less.

Acne-QoL domains were summarized using descriptive statistics with no imputation of missing values. Cutaneous safety and tolerability assessments were summarized using descriptive statistics. AEs were recorded and classified using the Medical Dictionary for Regulatory Activities (MedDRA) terminology. Imputations were not made for missing safety data.

Patient Disposition and Demographics
A total of 1614 patients were randomized in the two phase 3 studies. Of those, 684 were pediatric patients aged 10-17 years and were included in this pooled analysis (ITT population: 10-13 years, n=136; 14-17 years, n=548). Among these patients, more than 90% completed the study (Figures 1A and 1B). The most common reasons for study discontinuation were lost to follow up, patient request, and adverse events. The pediatric safety population comprised 676 patients; 8 patients were excluded due to absence of post-baseline safety evaluations.

Baseline patient demographics and disease characteristics are presented in Table 1. The majority of patients in the 10-13-year age group were female (64.0%) and in the 14-17-year age group, most patients were male (57.5%). More than 85% of patients in both age groups had moderate disease (EGSS 3), though the older age group had slightly worse disease severity given the higher mean number of inflammatory lesions and greater percentage of patients with severe disease (Table 1).

Tazarotene 0.045% lotion also provided significant reductions in inflammatory lesion counts versus vehicle in both pre-adolescent and adolescent patients. Specifically, at week 12, there 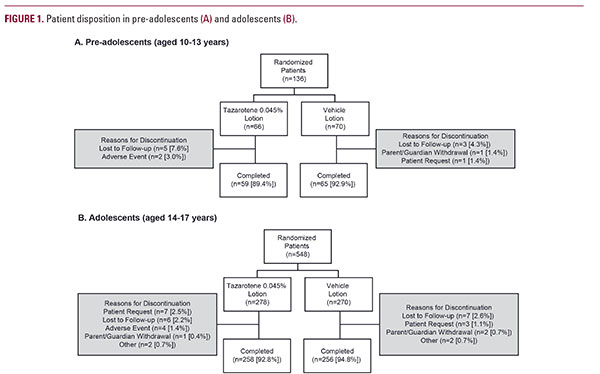