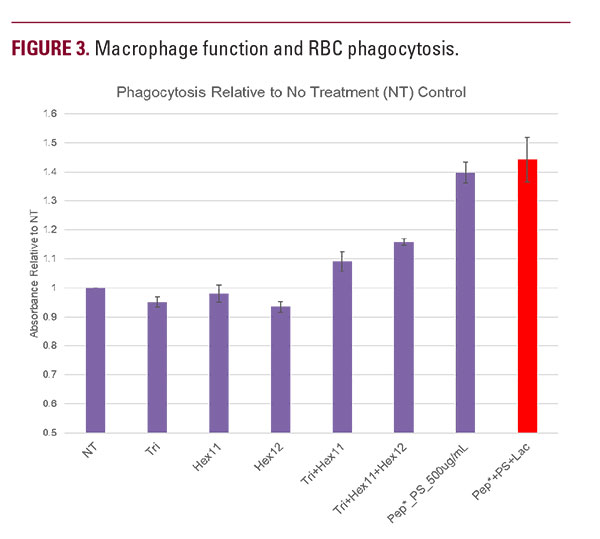 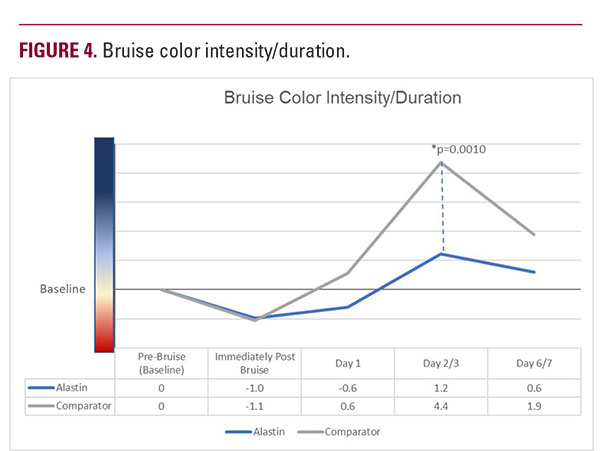 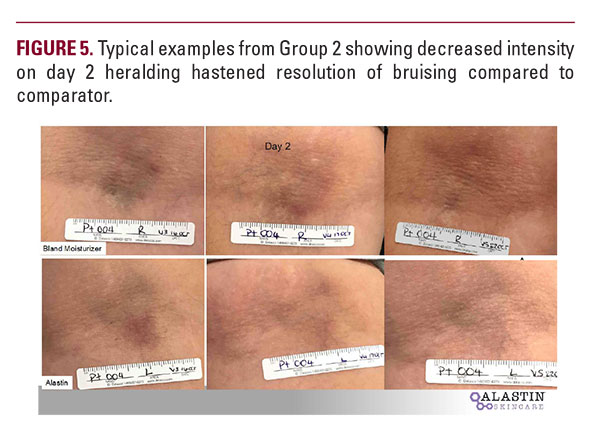 In Vivo
Objective assessment using colorimetry, SkinColorCatch, was deemed the most accurate means of assessment. Measurement of the intensity of the blue/yellow channel was undertaken at all time points – this score was then compared with the baseline score prior to bruise creation and the delta between blue intensity and original clear skin was compared between the two groups. In effect, this provided information of bruise resolution. In order to ensure equivalence of both groups, the scores immediately post-bruising needed to be comparable – this is illustrated in Figure 4. The two models showed slight variation injecting subdermally manifested with bruising slightly later – thus, days 3 and 7 in this group were equivalent to days 2 and 6 in the blood draw group. After analyzing the data, it was immediately apparent at day 2/3 that participants using the study product had 73% less bruise color intensity than the bland moisturizer, a statistically significant improvement over the bland moisturizer. Overall, 81% of subjects applying the study topical product had less bruising at day 2/3 compared to the bland moisturizer. This result suggests that the topical study product hastened resolution of bruising (Figures 5 and 6).

An interesting observation seen in many cases was the transition from blue to red that took place in the experimental group prior to resolution (see day 3, Figure 6 test group 1). Apparently, the blue pigment is absorbed efficiently leaving residual redness that rapidly dissipates. This is different from the often-described phases of bruising from oxygenated Hb (red) to de-oxygenated Hb (blue) then green, yellow, etc. to dissolution. It appears in the cases tested that the product encourages macrophage efficiency (as validated in vitro tests) that then absorbs pigment, leaving residual red pigment that resolves very quickly. In addition to the bruising resolution, symptomatic relief from inflammation, swelling, and pain is provided by phytoene and phytofluene, colorless carotenoids derived from saltwater microalgae that modulate prostaglandin E-2 (PGE-2) and have the ability to reduce oxygen radicals and absorb potential damaging visible light.11

In addition, xylitol has been shown to have antiinflammatory and antibiofilm effects especially when combined with lactoferrin.4 Arnica montana extract contains flavonoids and coumarins, accelerates healing, and reduces inflammation associated with bruising products by stimulating M2 macrophage function.12 Ledum palustre also known as Marsh Tea or Wild Rosemary has been used homeopathically for insect bites, puncture wounds, and swellings or bruises.13 It appears to have synergistic activity with arnica.13 This was demonstrated in split-face testing in patients following radiofrequency (RF) mi-