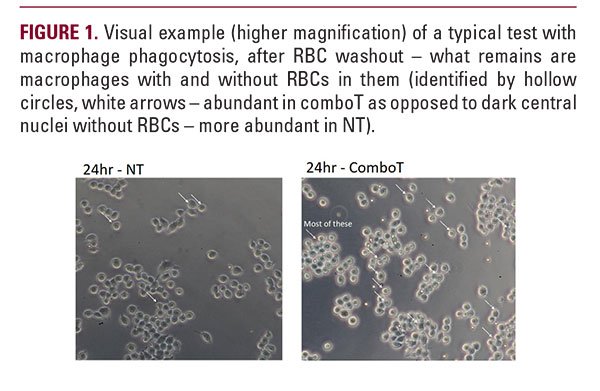 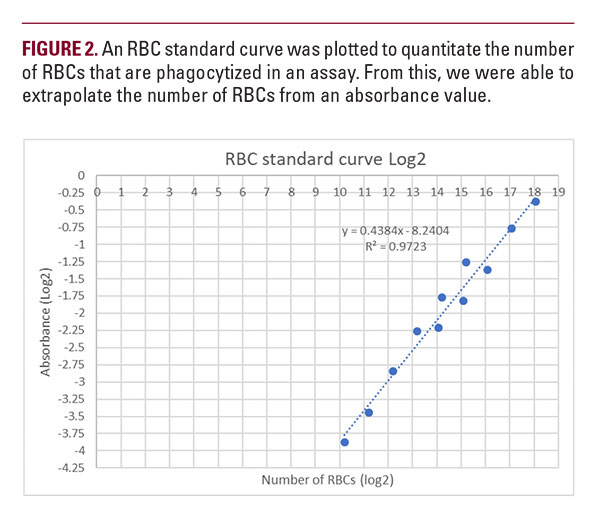 In Vitro Testing of Macrophage Phagocytosis of Red Blood Cells
First, an in vitro model for hemosiderin-laden macrophages was established and then used to test active agents and peptide activity in hemosiderin clearance. RBCs were labelled with a fluorescent marker (opsonized human RBCs with human RBC antibody); macrophages were added and the number of macrophages that phagocytize RBCs were observed (Figure 1). Non-phagocytized RBCs were then washed out, and the remaining macrophages were lysed, exposing phagocytized RBCs and the absorbance of these labelled RBCs were measured to assess macrophage function. We were able to draw an RBC absorbance curve and validate the model by measuring absorbance of RBCs that came from within the macrophages (Figure 2). Using human RBCs and macrophage cell lines, 24 hours was determined the best time point to measure the phagocytosis in this model. At 24 hours, the peptide-combination treatment described below showed the highest increase in phagocytosis.

In Vivo Testing of Bruising Resolution
A multi-center, randomized, double-blind study was undertaken to assess the efficacy and safety of a topical product formulated to increase the elimination of blood products that manifest as bruises. The study was approved by an institutional review board and all procedures were performed with respect to the ethical principles stated in the Declaration of Helsinki (amended in October 2013). This study investigated the topical study products’ ability to improve the appearance of bruises compared to a bland moisturizer. Skin types I–III, male and females aged over 18 were included. Eighteen participants were enrolled to receive bruises. Two were withdrawn due to lack of data leaving 16 participants – 32 bruises. Four additional participants were enrolled and underwent biopsies before and after treatment.

Eligible participants received an induced bruise on both arms via mechanical disruption, venipuncture, of a vessel as in a blood draw (one group) or via removal of blood and re-injection of 0.1 ml subdermally in the proximal inner forearm immediately distal to the antecubital fossa (second group).

Participants were randomized to receive either topical study product or bland moisturizer to use on the designated arm at a minimum of four times daily. One arm was treated with the topical study product on the bruise four times daily and the other arm was treated with the bland moisturizer four times daily. Participants were screened and underwent the procedure at the (day 0, baseline) visit and had follow-up visits at days 1, 2, 3, 6, and 7. Skin colorimetry (SkinColorCatch, Delfin Technologies, Kuopio, Finland) was performed in triplicate at each visit and clinical changes of bruises were documented using photography. Assessed endpoints included global improvement in the appearance of bruises between arms with comparison in SkinColorCatch measurements. Four participants consented to undergo a biopsy on the forearm at Day 0, pre-treatment, and at approximately two weeks post topical application, four times daily.