Dr Aguilera: If a patient develops swelling around the eyes, I prescribe hydrochlorothiazide to help eliminate the excess fluid.

Dr Yoelin: I advise patients with swelling to sleep with the head elevated on 2 or 3 pillows and to actively contract the muscles around the eyes. In my experience, the problem is usually transient and can be worse in those who have filler injections deep in the midface simultaneously with BTXA injection in the orbicularis oculi.

Treatment of the Upper Face
From the Files of Shino Bay Aguilera, DO, FAAD

A 59-year-old white female desired lifting of her brow and forehead. Using a 31G needle, she was treated with a total of 90 U of aboBTXA, with 50 U distributed evenly across 5 sites in the glabellar complex and 40 U in total injected in the lateral canthal and brow regions across 3 sites on each side (Figure 4A). Dosing using incoBTXA, onaBTXA, or praBTXA instead of aboBTXA would be 20 U in total for the glabellar complex and 8 U per side for the lateral canthal/brow injections. Figure 4B shows her appearance 2 weeks later.

Discussion
Dr Aguilera: The combined effects of aging and repeated BTXA injections can also cause changes in facial appearance over time, so the treatment approach should be modified accordingly. There are distinct differences between the upper third of the face of a female and that of a male due to sexual dysmorphism. Females have a more dominant upper third of the face because of a more convex frontal bone and additional fat, which causes the brows to arch to a greater extent and at an elevated position. In addition, females tend to have larger eyes than do males.

Certain races/ethnic groups, such as Asian and Latinos of Native American descent, tend to have a weaker upper third of the face compared with other groups. They have less bone and soft tissue, and the position of the brows is lower. This is a disadvantage when the aging process begins.

Previously, this patient was getting BTXA injections in the glabellar complex, lateral canthus, and frontalis. Over time, however, she developed widening of the area over her nose from the repeated frontalis injections. As mentioned previously, women have a more dominant upper third of the face compared with men. As the aging process takes place, there is a progressive loss of bone and soft tissue (fat and collagen). With the loss of these deeper tissues, there is a natural descent of the frontalis muscle, causing it to collapse at the bridge of the nose. The patient was told that she could either continue BTXA without the frontalis injections or have a frontoplasty to extend the use of BTXA frontalis injections.

I prefer to use aboBTXA in the glabellar complex and lateral canthus, but onaBTXA for frontalis injections. I find that onaBTXA in the frontalis provides a more natural relaxation of the muscle, whereas aboBTXA can give a more exaggerated relaxation, perhaps because of a greater diameter spread of the toxin.

Dr Yoelin: Would you use different BTXA products together on the same day?

Dr Cohen: I commonly use 2 different neuromodulators on the same day; for instance, onaBTXA in the glabella and aboBTXA in the lateral canthal area. In clinical trials and over many years of lots of treatments, immunogenicity has not been a problem with either product.

Dr Maas: I know clinicians who combine the use of products without any problems, but I prefer not to do that. Although there is no indication that blocking antibodies or tachyphylaxis develops at the low doses we use for cosmetic treatments, I think those events are theoretically possible. 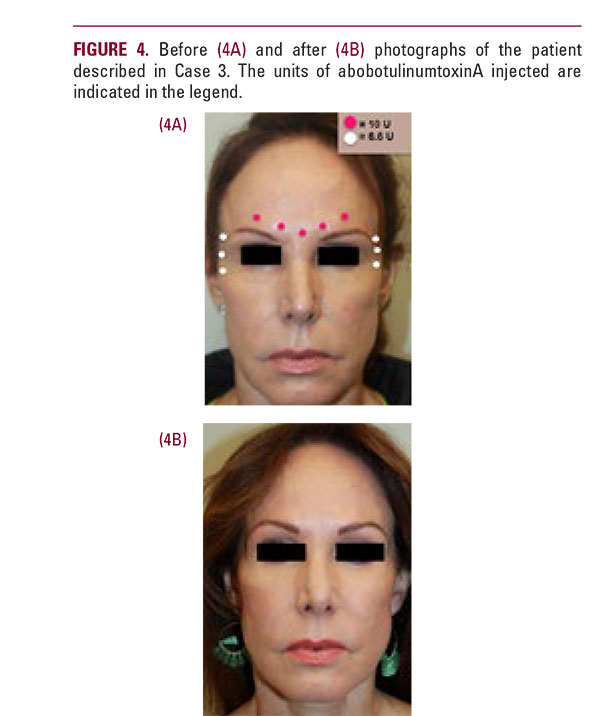