CME: Re-examining the Optimal Use of Neuromodulators and the Changing Landscape: A Consensus Panel Update

cians, unlike many non-core clinicians, are able to explain the actual differences, be it a quicker onset, a more specific effect, extended longevity, or something else. Another trend, according to the panel, is that patients are asking for treatment in a specific area rather than just asking the clinician what they should have done. Some ask for treatment in off-label areas because their medispa only treats on-label. The panel agreed that knowledgeable aesthetic physicians are better able to help guide patients based on their experience.

Several panelists suggested that it is beneficial, during the initial consultation, for aesthetic physicians to be upfront with patients and explain their own individual style. An analogy would be that if they were going to build a house, they’d want an architect with the same aesthetic sensibilities they’re looking for. It is important to explain, for example, that the ultimate goal is for patients to look like the best version of themselves, with natural, smooth results. The definition of “natural” continues to evolve, making the discussion tricky, but essential. The fact that aesthetic preferences vary throughout the country should also be considered when creating treatment plans.

PATIENT ANATOMY AND EVOLVING USE OF BoNT-As
The increasing demand for aesthetic treatments in younger populations requires thoughtful and age-appropriate counselling for delivering preventions and interventions. The physiologic, age-related changes that occur with increasing age help guide suitable treatment selection.11 The consensus panel agreed that anatomic considerations weigh very heavily into the appropriate use of BoNT-As. They related how all of the phase 3 BoNT-A clinical trials have been done with a standard 5-point pattern of glabellar injections, using fixed doses, as required for commercial release of a new drug. However, while studies using those doses and pattern give good results, they do not reflect normal clinical use, which varies widely based on patient-related factors.15 The panel felt strongly that clinicians must consider that every person’s face is different, not only due to varying gender, muscle mass, and age, but also to the contraction pattern of their muscles.16 In the glabella, for example, some people’s muscles converge, some pull down, some don’t need the fourth and fifth injection points. The concept of there being 5 different types of glabellar contraction patterns16 is particularly relevant. The standard 5-point pattern is really only appropriate for about 25% of the population. Some patients will get better results with a 2-point injection pattern, others a 3-point or even a 7-point pattern, depending on the muscles and their function.

The group agreed that it is challenging to correctly interpret how a patient’s muscle function is affecting their face, and how BoNT-A treatment will alter it, which is widely variable. To get the best results with BoNT-As, aesthetic physicians need detailed knowledge of the facial musculature (Figure 1), the movement of these muscles alone and in relation to others, and the notion of compensatory strengthening. Clinicians must be able to evaluate each individual patient’s presentation at rest and with normal and exaggerated animation,17 as it provides information about muscle mass and function and identifies areas of stronger or weaker muscle contraction and other subtle variations in musculature such as facial asymmetry, compensatory muscle use, and palpebral weakness.

Anatomic assessment is crucial. One panelist gave the example of when assessing for brow elevation, if a patient doesn’t have a significant lateral frontalis, they probably will not get a lot of brow lift. Alternately, if they have a very active frontalis that extends beyond the line of temporal fusion, the brow lift effect can sometimes be overly extreme. Judgement is more than just training and understanding the anatomy. Nuance is sophisticated, and something all aesthetic physicians should try to accomplish. It is a skill set that comes with experience and a detailed knowledge of anatomy. With BoNT-As, that ranks as a 10 on a scale of 1 to 10.

Because patient anatomy changes with aging, the panelists agreed that aesthetic physicians need to be aware of those changes and consider them when creating a treatment plan and discussing it with patients, especially younger educated ones. For example, one panelist explains BoNT-A dosing in females with a bell curve. Younger women need a little bit less BoNT-A, then need more as they age. But as patients get even older, they again need less. In older patients, the effects of BoNT-A may make lax skin more noticeable, so it makes sense to reduce the BoNT-A dosage and encourage patients to incorporate fillers and resurfacing because that will give them more value than increased BoNT-A doses. In general, males also need higher BoNT-A doses than females due to their larger muscle mass. 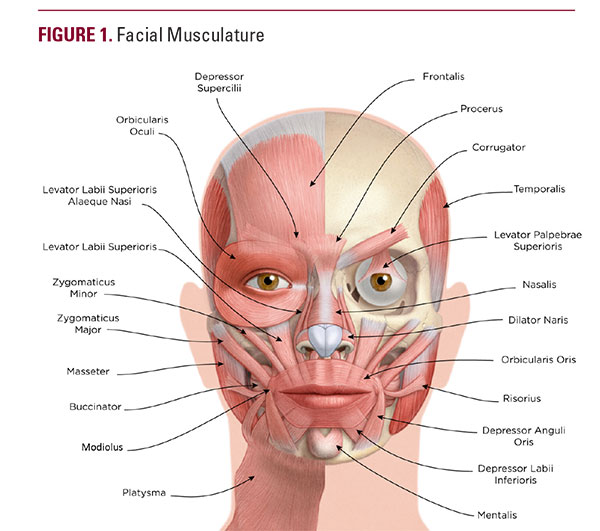 Careful placement of the correct dosing of BoNT-A offers the best chance of good patient outcomes, according to the group. Different areas require different doses of BoNT-A for a clinical effect, reflecting variations in muscular structure and function.15 Some people also respond to a lower dose of an individual agent while others need higher doses. Specificity hitting the target is as important as dosing. Many clinicians waste a lot of BoNT-A, because once saturation is reached, more drug will not provide additional benefits and may be detrimental. Many physicians have reduced dosing in the frontalis to avoid brow ptosis. The group discussed that, in reality, it can be avoided with accurate injections. With increasing expertise, it is possible to be incredibly precise with a lower number of units.

Another panelist mentioned how the significance of injection depth is rarely talked about with BoNTs but is incredibly important. For the glabella, for example, clinicians have generally been taught that the lateral corrugator injection needs to be very superficial, but superficial injections also impact the frontalis, which can cause unwanted effects. While many clinicians avoid deep injections because of what they’ve been taught and because they’re concerned about eyelid ptosis, it is important to be deep into the corrugator. Good injection technique is very specific to the muscle. Precision injection, based on a thorough assessment and understanding of the functional anatomy, is what’s going to give the best results. The consensus group agreed that the field of effect of prabotulinumtoxinA-xvfs (Jeuveau®, Evolus, Inc.) may be more precise than that of other BoNT-As and may be helpful in that regard.

The panel agreed it is important to get the right results because BoNT-A treatment affects facial expression, which affects how patients are interpreted by others they interact with. The lack of immediate efficacy makes BoNT-A treatment complicated as compared with soft tissue fillers, where it is possible to see the immediate volume increase as an area is injected, as well as differences in symmetry. With BoNT-As, clinicians must envision what the results will be in 7 to 10 days based on individual patient characteristics. Injectors who don’t understand this concept might get good results, but often are unable to attain great ones. The group felt that this is another issue that separates novice injectors from more experienced ones and is an important concept to try and get patients to understand.

According to the group, assessment at a follow-up visit after the first treatment can add a great deal of information about the individual patient and the way BoNTs affect them, which helps identify how to adjust treatment going forward. That information can’t be obtained any other way. Follow-up can be especially helpful if the patient has asymmetry or an unusual forehead. Many patients, especially those who are BoNT-A-naïve, appreciate it when offered the opportunity to come back in for a follow-up visit, as it shows clinicians care enough to see what the results are going to be. If patients are concerned about the number of visits, they can be told they usually only need to come back after the first treatment, because the pattern and dosage will be evident after that. Another strategy for BoNT-A-naïve patients is to conservatively treat their glabella and have them come back in 2 weeks to see the results before treating other facial areas.

DIFFERENCES IN THE 4 APPROVED BoNT-As
Each of the 4 commercially available BoNT-A formulations is approved for various indications in different countries. Despite sharing a similar mechanism of action and efficacies, there is continued discussion about their comparability.18 Each agent