Atopic Dermatitis and the Role of the Skin Microbiome in Choosing Prevention, Treatment, and Maintenance Options 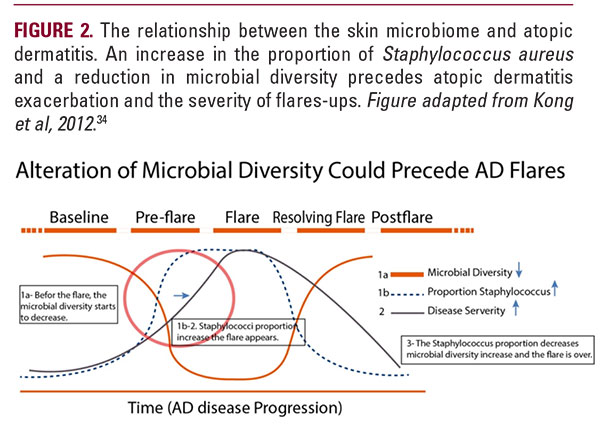 directional relationship, dysbiosis leads to barrier dysfunction and barrier dysfunction results in aberrant microbiome.29 The cutaneous microbiome is an ecosystem that includes a diverse array of microorganisms, including viruses, fungi, mites, and bacteria.31 The composition of this ecosystem can be altered by many factors, including but not limited to anatomical location,32 pH, moisture level, and the distribution of hair follicles and sebaceous glands, gender, age, and ethnicity.

A recent review investigated the relationship between the skin microbiota and barrier function and describes how each component can affect the other.29 Baldwin et al (2017) describe how the skin microbiota can interact with the cutaneous barrier through the release of proteases, lipases, ureases, bactericidal peptides and by quorum sensing and skin nutrition. Conversely, they also describe how the skin barrier interacts with the microbiota through mechanisms such as providing nutrients, controlling the climate, and balancing and regulating bacteria.29

In AD and other inflammatory disorders such as psoriasis and acne vulgaris, the importance of maintaining a balanced and diverse microbiota has been demonstrated. In an environment that favors invasive organisms, colonization of pathogenic bacteria may ultimately breakdown the cutaneous barrier. Indeed, over 90% of AD patients have colonization of the pathogenic bacteria Staphylococcus aureus, and increasing disease severity has been found to correlate with a reduction in microbial diversity. The temporal shifts in the skin microbiome have long been associated with AD flares. For example, microbial communities at disease sites are dramatically different in AD patients compared to controls.34 In AD, the proportion of S. aureus and commensal S. epidermidis are significantly increased during flare-ups; and following therapy, colonies of Streptococcus, Propionibacterium, and Corynebacterium species are observed.34 These findings reveal an association between skin microbiome and AD.

Current Topical Treatments for AD
Standard topical therapy in AD includes topical corticosteroids (TCS), calcineurin inhibitors (TCI) and crisaborole, all of which function by inhibition of numerous aspects of the inflammatory response in AD. The use of TCS ultimately reduce the expression of pro-inflammatory genes and effectively reduce inflammation by suppressing the immune reaction mediated by lymphocytes, mast cells, eosinophil, dendritic cells, and macrophages.9 However, high potency TCS are not suitable for sensitive areas, such as the face, eyelids, genitals, and skin folds; there are local and systemic side effects associated with the extended use of TCS, such as skin atrophy, telangiectasia, striae, dyspigmentation, development of glaucoma, hypothalamic-pituitary-adrenal axis suppression, growth retardation, and Cushing's syndrome.35,37 Therefore, TCS are not suitable for everyone or in all cases of AD management.

TCIs, such as tacrolimus and pimecrolimus that were approved in 2006, are macrolactams with immunosuppressive characteristics. Like TCS, TCIs decrease the release of proinflammatory cytokines. Unlike steroids, they lack many of the unwanted side effects on healthy skin. Also, TCIs have lower transepidermal fluxes, which was thought to increase their safety.37 However, 5–6 years after release, the FDA issued a black box warning for both drugs regarding the theoretical risk of malignancy. This warning was met with criticism from numerous medical associations regarding the scientific rationale for this decision. Side effects of use are primarily complaints of skin warmth and burning.

The use of quality moisturizers containing occlusives and humectants have been found to improve barrier function, reducing trans-epidermal water loss and improving skin hydration.35,40 However, partial restoration of the barrier function in AD-affected skin with emollients is not always sufficient as it