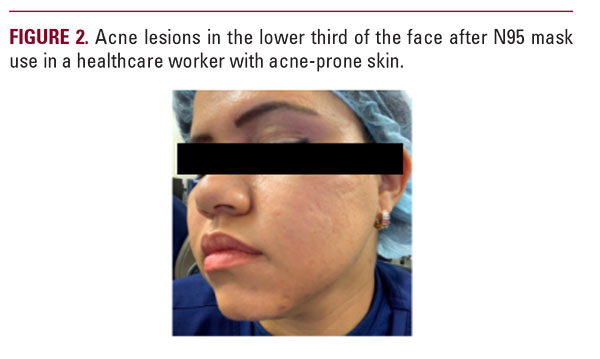 Acne exacerbations in predisposed individuals or de novo has been one of the most common adverse reactions reported to the N95 mask. In a study by Foo CC1 et al, over 35% of the staff who used masks regularly reported adverse skin reactions. Acne was the most frequent condition representing almost 60% of the patients in this study. All those who had skin reactions developed them while using N95 masks for an average duration of 8 hours a day and over a mean period of 8.4 months.11

The most common adverse reaction reported to the N95 mask was acne, and this has 2 plausible explanations. First, a hot and humid microclimate is created in regions of the face covered by the mask, which predisposes a flare-up of acne. Secondly, occlusion of pilosebaceous ducts due to local pressure on the skin from the close-fitting mask could result in an acne flare.15

Pathophysiology
The appearance of acne with the use of N95 has many possible explanations. Acne occurs in sites dominated by Cutibacterium acnes (formerly Propionibacterium acnes) and Malassezia species, both of which can function either as commensal or pathogenic.

Skin microbiota provides the first line of protection against environmental factors and pathogens. The microbiota consists of both ‘resident’ and ‘transient’ microbes, and is constantly in flux, changing alongside environmental and host factors such as ultraviolet exposure, environmental microbes, personal hygiene and consumer care products, host hormone levels, sebum, and sweat. ‘Microbiota’ refers to microorganisms on the skin, and the ‘microbiome’ represents the total genomic component, measured by DNA analysis.12 A complex interaction between skin and its commensal microflora safeguards skin from day-to-day environmental influence. Occasionally, because of imbalanced relationships, the skin commensal microbiota may shift to harmful communities in noninfectious skin-related pathologies such as atopic dermatitis, psoriasis, rosacea, and acne.13,14 This imbalance is thought to potentiate epithelial dysfunction, immune dysregulation, or overgrowth of pathogenic microbes. Several factors, such as hygiene and environment, may involve changes in the microbiota composition among healthy and acneic skin. Acne tends to be more comedonal in preadolescents. Given this, it has been hypothesized that the microbiome of preadolescents or people with overproduction of sebum (hyperactive sebaceous glands) might be different.15

Factors that affect patients wearing long-term N95 masks may include the following: a hot and humid microclimate that is created in regions of the face covered by the mask, which predisposes to a flare-up of acne. Secondly, occlusion of pilosebaceous ducts due to local pressure on the skin from the close-fitting mask could result in an acne flare. Itch and rash were reported frequently as well with most cases probably due to irritant contact dermatitis from components of the mask.11 Third, stress has long been suspected to induce acne flares by anecdotal observations but more recently has been scientifically proven. In a student examination stress study, increased acne severity is significantly associated with stress levels (Figure 2).16

The role of skin and the peripheral hypothalamic-pituitary-adrenal (HPA) axis has been studied in the pathogenesis of acne. Corticotropin releasing hormone (CRH) and its receptors have been detected on sebocytes. CRH promotes lipogenesis in sebocytes through up-regulation of key enzymes.17 Other hormones including ACTH and α-MSH also contribute to sebum production and possibly worsen the acne.18

Treatment Recommendations
Patients with acne prone skin should avoid pump-bottle lotions. These tend to contain more alcohol and can burn and sting when applied to skin that is dry, cracked, or peeling. Avoid retinol-containing anti-aging products, hydroxy acids, scrubs, and peels that can irritate the skin even more.

For long shifts healthcare workers may use gentle facial wipes cleansers with ingredients such as:
• Mild salicylic acid and witch hazel
• Lipo-hydroxy acid (LHA), a derivative of salicylic acid, used