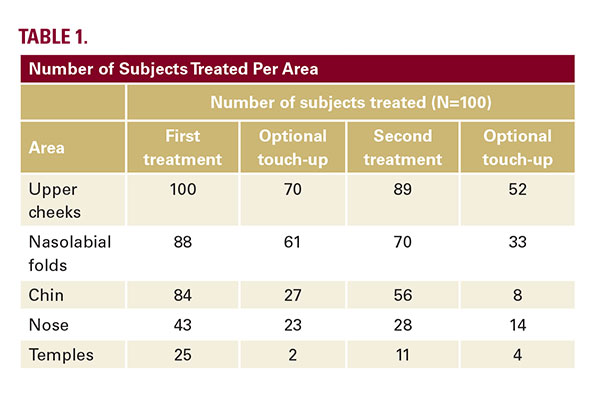 evaluated in a sub-study on aesthetic improvement of the chin. An independent evaluator assessed subject photographs using GAIS (2D, and 3D photographs), the validated Galderma Chin Retrusion Scale10 (GCRS), and a Jawline Sagging Scale (JSS; improved/no change/worse) from timepoints 1, 6, and 12 months after both treatments. It should be noted that subjects were not treated specifically for chin retrusion or jawline sagging but for an overall clinically meaningful improvement. Main objective of the sub-study was aesthetic improvement of the chin 6 months after first treatment using GAIS (2D-photographs).

First impression survey assessments were presented descriptively and change from baseline was analyzed with Wilcoxon signed-rank test. Scale assessments for upper cheek fullness and nasolabial folds, as well as the proportion of improved cheeks/folds was presented with a 95% confidence interval. Safety variables including subject diary symptoms and adverse events were analyzed descriptively. All statistical analyses were performed using SAS® system version 9.4. 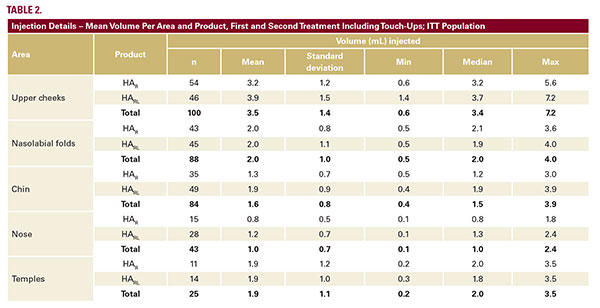 Subject Disposition, Demographic, Baseline and Injection Data
One hundred female subjects with Han Chinese facial appearance were included in the study. Mean age was 40 years (range, 27–49). Four subjects were withdrawn from the study during follow-up due to withdrawn consent (n=3) and adverse event (discomfort [mild]; n=1). The ITT and Safety population both comprised the 100 subjects enrolled in the study. The final per protocol population included 94 subjects; six subjects were excluded due to excess volume injected per treatment area at first treatment. At first treatment, 100 subjects were injected