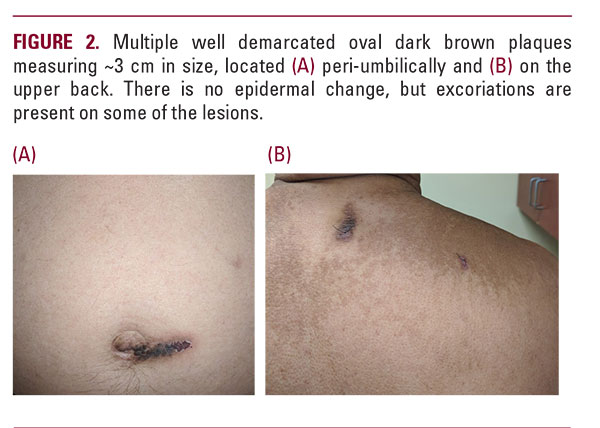 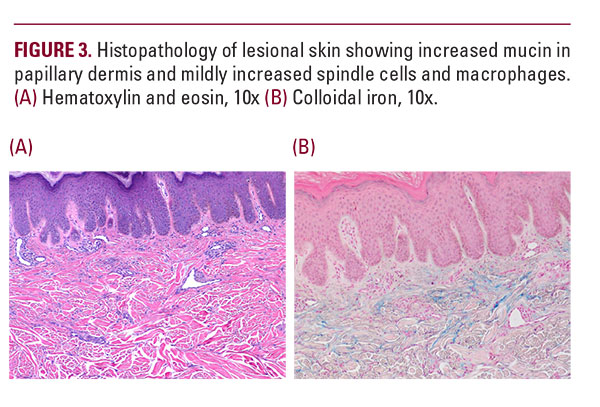 The first subset of LM, scleromyxedema, has four defining criteria: 1) generalized papular and sclerodermoid eruption, 2) mucin deposition, fibroblast proliferation and fibrosis, 3) monoclonal gammopathy, and 4) absence of thyroid disease. Scleromyxedema is equally present in both sexes with a mean age at diagnosis of 59.2,3 It is characterized by widespread, symmetric, 2-3 mm firm, waxy, closely spaced papules in a linear pattern. The surrounding skin is indurated and may display erythema, edema, red-brown discoloration and pruritus. Scleromyxedema involves the face and neck, unlike localized LM. The microscopic triad of scleromyxedema is 1) interstitial mucin, 2) increased collagen deposition in the upper reticular dermis, and 3) marked proliferation of irregularly arranged fibroblasts. As a result, patients experience skin thickening, stiffening, and decreased mobility of the joints. A superficial lymphocytic and plasmocytic infiltrate is also often present. IgG λ paraproteinemia is seen in 83.2% of cases.2 Characteristic signs of scleromyxedema are “leonine facies” due to deep longitudinal furrowing of the glabella and papular thickening of the ears, “shar pei sign” due to deep furrowing on the back, and “doughnut sign” due to skin thickening causing an elevated rim with a central depression on the extended proximal interphalangeal joint.2,3 Scleromyxedema may be differentiated from systemic sclerosis by cutaneous findings of telangiectasias, nailfold changes, or calcinosis, which are present in the latter.2,3 Extracutaneous manifestations of scleromyxedema include myositis, arthralgias, Raynaud’s syndrome, Sjogren’s disease, central nervous system disturbances, carpal tunnel syndrome, dysphagia, macular edema, ectropion, and lagophthalmos. Mucin deposition in pulmonary and coronary vessels has led to restrictive and obstructive lung disease, and hypertension, atherosclerosis, and myocardial infarction, respectively. Dermatoneuro syndrome is a common cause of death in scleromyxedema. Symptoms include fever, confusion, dysarthria, lethargy, convulsions, and coma. CT is normal and brain biopsy shows gliosis and demyelination, rather than mucin deposition.2,4 Death has also resulted from myeloid leukemia, Hodgkin lymphoma, and myocardial insufficiency.4 The etiology of scleromyxedema is unknown. Fibroblast overstimulation of IL-1, TNF-a, and TGF-beta has been proposed.5 There is no definitive treatment due to its poorly understood pathogenesis. Intravenous immunoglobulin has proven more effective than corticosteroids for both cutaneous and extracutaneous manifestations.4 Spontaneous resolution is also possible, even after 15 years.2,4
The second subset of LM, localized, has three defining criteria: 1) papular or nodular/plaque eruption, 2) mucin deposition with variable fibroblast proliferation, and 3) absence of both monoclonal gammopathy and thyroid disease. Localized LM is further divided into 5 subtypes: 1) discrete papular, 2) acral persistent papular mucinosis, 3) self-healing papular mucinosis, 4) papular mucinosis of infancy, and 5) nodular form.2,13 The discrete papular type presents with symmetric, 2-5mm firm, smooth, waxy or flesh colored papules involving the trunk and limbs. The face is spared, and skin is not indurated. Fourteen cases of HIV preceding LM have been reported,13 discrete and one acral persistent. Discrete LM is also associated with Hepatitis C.1,2,6 It has been proposed that HIV stimulates mucin and collagen production in LM.5 Acral persistent papular mucinosis is more common in females (4.7:1) and presents with multiple ivory to flesh colored papules exclusively on the dorsal hands, extensor surface of the wrists, and occasionally the distal forearms.2 Self-healing papular mucinosis is divided into juvenile and adult variants. In the juvenile form, mucin in periarticular nodules leads to arthralgias, weakness, and fever.2,7,13 These symptoms are rare in the adult variant. Histologically, there is diffuse mucin deposition in the upper reticular dermis.13 The self-healing subtype resolves spontaneously within weeks to months.2,7 Papular mucinosis of infancy is often considered the pediatric equivalent of the discrete or acral subtypes, and presents with firm, opalescent papules on the upper arms, and trunk.2 In childhood, localized LM must be differentiated from mucinous nevus, a neoplastic hamartoma. Mucinous nevus presents as mucinous lesions with nevoid features in a unilateral, linear or dermatomal pattern. Histologically, band-like mucin deposits are seen in the