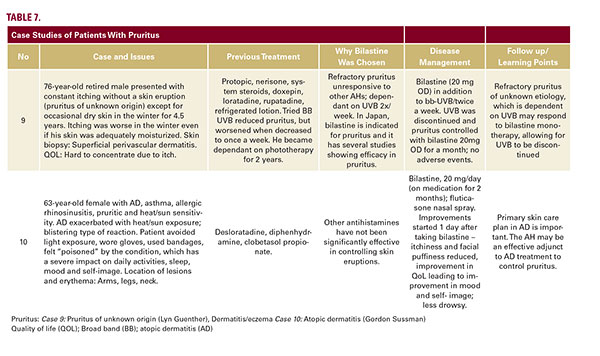 Pruritus of unknown cause and pruritus associated with AD
Table 7 discusses two patients with pruritus: In case 9, the patient presents with pruritic symptoms due to an unknown cause, while case 10 involves a patient with AD-related pruritus. For these patients, education on their conditions, avoidance of pruritic triggers, and the implementation of a primary skincare plan using a moisturizer were essential to improving their condition. Second-generation AHs can sometimes help to treat pruritus related to AD, but not the AD itself. In case 10, bilastine is shown as an effective adjunct to AD treatment to control pruritus. However, adherence to therapy is important for success. Again, panel members emphasized that the sedation caused by using firstgeneration AH is not helpful in treating pruritus and can also cause serious side effects.1-6,12

The panel members recommended that for pruritic conditions, bilastine is continued until all symptoms subside, usually, 1 to 2 months duration, up to 6 months, or longer if necessary. The panel suggested a minimum of 2–3 months with no condition activity or symptoms before discontinuing bilastine, after which the AH is taken as needed. In SAR an AH is to be taken for the duration of the pollen season, and those with PAR can take it indefinitely. In those patients with CSU the time they need to take AH varies considerably. Generally we treat until the disease is gone.

The panel members concluded that their task is not only to teach about the risks of first-generation sedating AHs but also to educate healthcare providers (including primary care physicians) and their patients on how and why they should use second-generation AHs.

The authors stated: “Bilastine is not available in the US, but it is in Canada, and we find it effective.” Although guidelines from the US recommend second-generation AHs, due to lack of availability, the choices are more limited.38

Second-generation AHs are thoroughly investigated in clinical pharmacology studies and randomized controlled trials. Every day clinical practice can pose challenges when selecting an effective and safe AH for the treatment of allergic conditions.The real-world cases presented here applied bilastine in conditions such as SAR, PAR, chronic urticaria, and less common but challenging conditions such as urticarial vasculitis and pruritus in