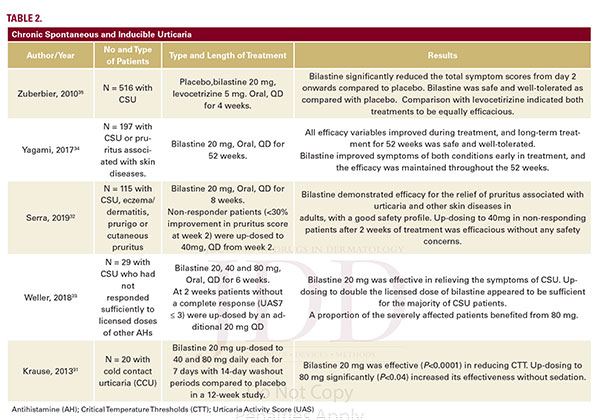 The efficacy of bilastine in SAR and PAR has been confirmed in several studies comparing bilastine to either placebo alone or to placebo and other AHs (Table 1).15,25-28

The Kuna et al. trial was a double-blind, randomized, controlled study performed in patients suffering from SAR to determine the efficacy and safety of bilastine 20 mg compared to cetirizine 10 mg, and placebo.15 The mean total symptom scores were reduced in the bilastine and cetirizine treated groups to a similar, and significantly greater extent, compared with placebo. Bilastine demonstrated a significantly lower incidence of somnolence and fatigue compared to cetirizine.15 An additional multicenter study evaluated bilastine (20 mg), desloratadine (5 mg) or placebo treatment in 721 patients with SAR.25 After 14 days of treatment, both nasal and non-nasal symptoms had significantly decreased in those patients who received the drugs compared to placebo.25

Chronic urticaria
Chronic spontaneous urticaria and other chronic forms of urticaria are disabling, impair quality of life and affect performance at work and school.29 CSU is characterized by the appearance of spontaneously occurring pruritic erythematous wheals that generally resolve in less than 24 hours.30 These wheals may appear daily for more than 6 weeks; in 50% of cases, associated angioedema or severe associated swelling occurs.30 CSU has a prevalence of 0.5-1% of the general population, occurring mostly in women; the peak age of onset is 20-40 years, and 10-50% may have the disease longer than 5 years.3

International urticaria guidelines recommend second-generation AHs as first-line treatment.13,29 As a second-step in therapy, before resorting to other treatments, these second-generation AHs have been recommended at high doses (up to 4x therapeutic dose) based on studies showing the benefit of a higher dosage of 2nd generation antihistamines and expert opinion.29

Bilastine has been assessed in multiple clinical trials involving patients with chronic urticaria (Table 2).31-35 In a double-blind, controlled clinical trial with placebo and levocetirizine in patients with CSU, the total symptom score was reduced from the second day of treatment with bilastine, bilastine showed better