used in Canada for treatment of symptoms in allergic rhinitis and urticaria are desloratadine, cetirizine, fexofenadine, loratadine, rupatadine and bilastine. Even though these are all 2nd generation antihistamines they have different attributes. For example, cetirizine can cause somnolence in some individuals, fexofenadine has a relatively short duration of action and may be required to be taken twice daily for all-round daily protection and loratadine, desloratadine, as well as rupatadine, are extensively metabolized within the liver by the group of enzymes belonging to the P450 cytochrome system10,15

Bilastine is a newer second-generation AH that is rapidly absorbed without being metabolized and has a bioavailability of 60%.16 In vitro, this AH has a high selectivity for the H1-receptor and no antagonism against other receptors such as serotonin, muscarinic M3-receptors, adrenoceptors and H2- and H3-receptors. 16 Since bilastine is not metabolized, no dose adjustment is required in patients with hepatic impairment.17 Bilastine has a rapid onset of action, within one hour, and a long duration of action, greater than twenty-six hours.17,18 With regards to bilastine and safety, at the recommended dose of 20 mg daily, treatment-emergent adverse reactions with bilastine, including somnolence, are equal to placebo.17 Bilastine does not cross the blood-brain barrier, and therefore at the 20 mg dose, it does not affect functional performance, the ability to drive, potentiate the effects of alcohol and lorazepam or cause the impaired performance of tasks related to flying.5,6,17,19 In clinical trials where bilastine was administered at doses of up to 40 mg once daily, it did not affect psychomotor performance and did not affect the subjects’ driving performance in a standard car driving test.6,20

Bilastine fits many of the properties for an ideal AH, described by the ARIA guidelines: Potent and selective activity at H1 receptors, rapid onset and long duration of action, and efficacy in PAR and SAR. Other beneficial properties include a lack of interactions with cytochrome P450, lack of sedation, cognitive or psychomotor impairment, no anticholinergic activity, no cardiac safety concerns, and no potential for tachyphylaxis.21

Seasonal and Perennial Allergic Rhinitis
Allergic rhinitis
Allergic rhinitis is a chronic condition mostly occurring in children, adolescents, and young adults.22 Prevalence of 10%–25% has been shown in a cross-sectional study among four world geographic regions: Asia, Europe, the Americas, and Africa.22 Symptoms are more intense during spring and autumn;22 allergens provoke symptoms such as nasal itching, sneezing, rhinorrhea, and nasal obstruction frequently leading to reduced quality of life.22-24 Histamine, released by mast cells and basophils, is responsible for the symptoms.7,22-24 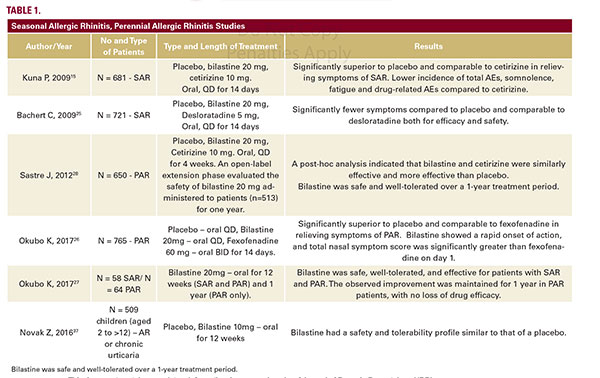