Tazarotene 0.045% Lotion for the Once-Daily Treatment of Moderate-to-Severe Acne Vulgaris in Adult Males

Cutaneous Safety and Tolerability
There were slight transient increases in mean severity scores for scaling (from week 2 in both groups) and erythema (from week 2 in the adolescent males). Over the 12-week treatment period, no score was greater than 0.4 (where 1=mild), with similar severity at the end of the study compared with baseline (Figure 5). Hyper- and hypopigmentation was rare at baseline, and throughout the study period. 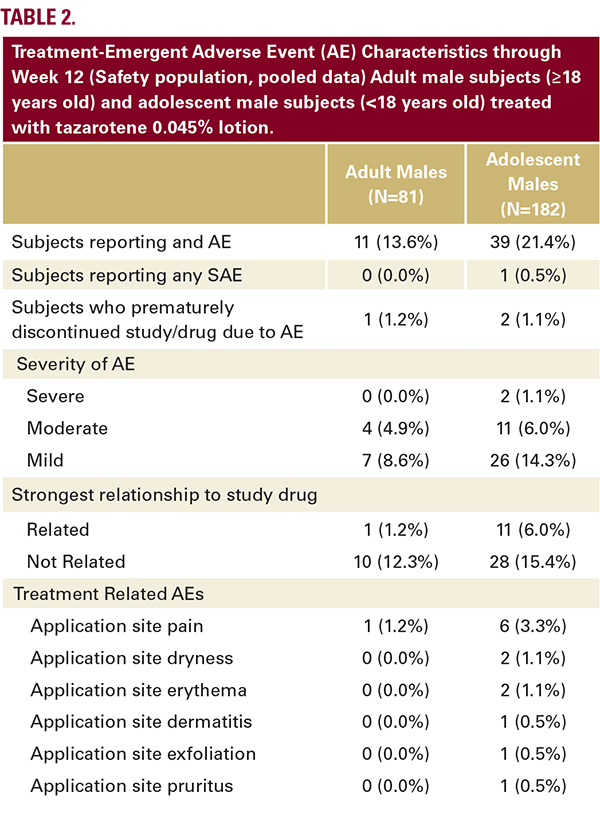 Acne is a very common skin disorder that is predominantly seen in adolescence. However, data suggest that the prevalence in adults is increasing, especially in females.2 While the prevalence of adolescent acne is similar between genders, postadolescent acne appears to affect more women than men, with a prevalence of three percent in men and 12% in women in a population of randomly selected individuals with similar demographic characteristics.2 Although there has been a significant increase in interest in adult female acne as a result, data on the treatment of adult males with moderate or severe disease remains sparse.

A post hoc analysis on the treatment of moderate-to-severe acne with the fixed combination clindamycin (1.2%)/benzoyl peroxide