Tazarotene 0.045% Lotion for the Once-Daily Treatment of Moderate-to-Severe Acne Vulgaris in Adult Males

Statistical and Analytical Plan
The intent-to-treat (ITT) population comprised all subjects randomized and provided with study drug. The safety population comprised all randomized subjects who were presumed to have used the study medication or vehicle at least once and who had at least one post baseline evaluation. The primary method of handling missing efficacy data in the ITT analysis set was based on estimation using the Markov Chain Monte Carlo multiple imputation method. For analyses of the changes from baseline in noninflammatory and inflammatory lesion counts in both pivotal phase 3 studies, significant skewness was observed, and a nonparametric method used in which the changes in lesion counts were rank-transformed prior to being submitted to the ANCOVA. Values were adjusted for multiple imputations. Significance of EGSS reductions were obtained from logistic regression (using Firth’s Penalized Likelihood) with factors of treatment group and analysis center. Values were adjusted for multiple imputations. Descriptive statistics were used to summarize the results of the Acne-QoL questionnaire. In subjects who discontinued treatment before week 12 or missed visits between baseline and final evaluation, the last observation was carried forward. All statistical analyses were conducted using SAS® version 9.3 or later. Statistical significance was based on 2-tailed tests of the null hypothesis resulting in P values of 0.05 or less. All AEs occurring during the studies were recorded and classified on the basis of medical dictionary for drug regulatory activities terminology (MedDRA) for the safety population.

Safety
Safety evaluations, including AEs, cutaneous safety evaluations and tolerability, vital signs, laboratory evaluations, and physical examinations were performed; information on reported and observed AEs obtained at each visit, cutaneous safety and tolerability at each study visit. Cutaneous safety (individual assessments of scaling, erythema, hypopigmentation, and hyperpigmentation at the drug application site) was reported by the investigator/evaluator at all postscreening study visits using a 4-point scale, where 0=none and 3=severe. Tolerability (individual assessments of itching, burning, and stinging) was reported by the subjects at all postscreening study visits. Subjects were asked to provide an average evaluation of each parameter over the period since the previous study visit using a 4-point scale, where 0=none and 3=severe.

Vital sign measurements were recorded, blood samples collected, and an abbreviated physical examination performed at baseline and week 12. A medical history was taken at screening, and confirmed and revised at baseline, if necessary.

Demographics and Baseline Characteristics
Comparing the two male subject populations treated with tazarotene 0.045% lotion, there were a few differences between the two groups (Table 1). There were more Caucasian adolescent 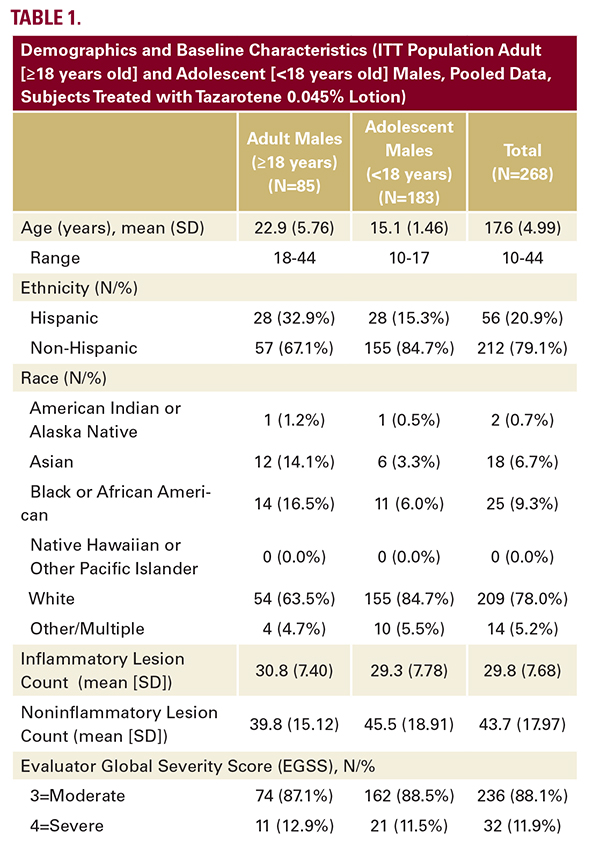