expecclusion, with or without modification. Following the first round of the Delphi technique, participants were provided with the results from the entire panel. Where statements remained unmodified, participants were shown individual ratings and the group ratings. This included the percentage of the group that agreed the statement was clear, median rating for inclusion, percentage of the group who rated the statement as ‘definitely include’, and combined comments. This summation of comments made each participant aware of the range of opinions and the reasons underlying those opinions.

Where a statement was modified, participants were shown the same information and asked to re-rate the revised statements. Deleted statements were not presented to the panel in subsequent rounds. Non-responders were sent weekly follow-up email reminders to complete the online survey.

All online surveys were built and distributed using SurveyMonkey ® software. Data collection for all three rounds took place over 3 months; however, data collection per round lasted no longer than two weeks. All eight clinicians participated in Rounds 1 and 2 and the subsequent conference call.

The feedback process allowed and encouraged the participants to reassess their initial judgments about the information provided in previous iterations based on their ability to review and assess the comments and feedback provided by the other consensus panelists. 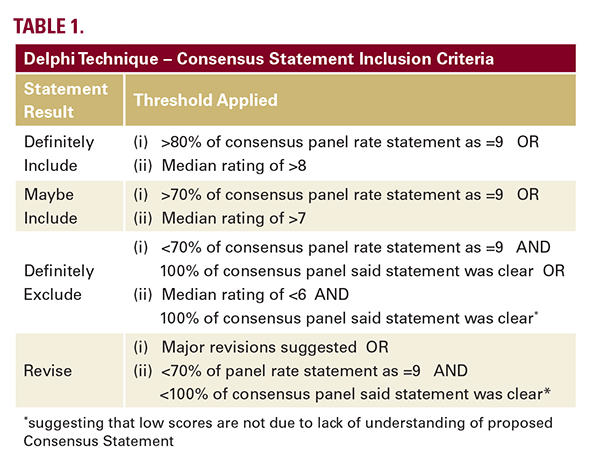 The comprehensive MedlinePlus11 search failed to identify any peer reviewed clinical studies or consensus guidelines on the use of the 4th generation non-microneedling monopolar RF device. Consensus Statements had been published for the first generation device12 but given the technical advances that have occurred over the past 15 years, and the absence of clinical studies comparing each generation device, these may not be relevant or applicable for the 4th generation of non-microneedling monopolar RF.

The Round 0 online questionnaire resulted in the development of 32 statements. These addressed patient selection, patient outcomes, treatment settings and practical use of non-microneedling monopolar RF.

Following Round 1 review of the 32 statements, 12 were unmodified, 7 statements were deleted, and 13 statements were revised based on participants comments. Two statements were added as a result of revisions that split subject matter from one previous statement into two new statements and one statement – Patients who are treated with 4th generation non-microneedling monopolar RF every 1-2 years may experience prolonged, consistent skin tightening that helps to prevent future sagging – was added, as one of the panelists felt strongly that this had been omitted from the original list, resulting in a total of 28 statements being submitted for review in Round 2.

Round 2 results revealed 19 statements that met the threshold for inclusion; 3 that were classified as maybe include; 2 that could be excluded and 4 for which revisions were suggested. A conference call was then conducted between all members of the consensus panel and the independent observer to review and discuss the “maybe include” and “revise” statements from Round 2, which resulted in the acceptance of 19 final Consensus Statements.

Final Consensus Statements
1. Skin quality, degree of laxity and extent of photoaging are more important than chronological age when selecting the ideal candidate for 4th generation non-microneedling monopolar RF. Although some clinicians suggest the ideal candidate is between 30-65 years old, patients outside of this age range (ie, over 65 years old) can also benefit. As 4th generation non-microneedling monopolar RF addresses skin laxity through immediate collagen contraction and secondary collagen remodeling, it is possible better results will be achieved in patients without extensive collagen damage (ie, sun damage, acne scarring).

2. The ideal 4th generation non-microneedling monopolar RF patient should have no more than mild-moderate skin laxity. People who have mild-to-moderate sagging skin are more likely to benefit from this treatment than people with severe facial sagging. The consensus panel agreed that although even severe laxity may improve, the results are less predictable. [It is important to note that there is no FDA or dermatology society agreed definition of mild, moderate, or severe laxity. Thus, these terms are largely subjective and based on physician and patient experience and expecclusion