by 25 percent. Its FDA cleared indications include non-invasive treatment of facial and periorbital wrinkles and rhytids, including lower and upper eyelids, and temporary improvement in the appearance of cellulite.

Given the absence of high-quality evidence or peer-reviewed published practical guidance, the aim of this research was to develop a set of clinician-led consensus statements on the use of this novel 4th generation non-microneedling monopolar RF device.

In parallel with development of the online survey, a panel of eight international experts were invited, and agreed, to participate in an online collaboration to develop consensus statements. The experts were all practicing aesthetic dermatologists. Seven were located in the US while one was based in Hong Kong. All had clinical experience treating patients with one or more generations of non-microneedling monopolar RF (mean, 12.7 years) and the 4th generation device (mean, 12 months / 50-100 patients).

The questionnaire was delivered electronically, and complete responses were received from 7 of 8 members of the expert consensus panel.

Based upon the responses to the Round 0 survey, 32 consensus statements were developed by the independent observer and reviewed by two independent third parties with subject matter expertise to confirm clinical accuracy.

These consensus statements were then distributed and reviewed by the panel in accordance with a modified Delphi technique1 — a group communication process that aims to achieve a convergence of opinion on a specific real-world issue. 2 The Delphi technique has been validated and widely used for medical research3-9 and has been shown to be particularly valuable for consensus building2,3 and when there are gaps or contradictions in knowledge.

An iterative approach was employed where sequential surveys were presented to the expert panel of experts to gain consensus. 10 Participants reviewed and commented on the statements in isolation and all responses were anonymous, ensuring each participant provided their own opinion without influence, peer-pressure, or the potentially coercive effect of dominant individuals within the group.3

Using the criteria in Table 1, all statements were analyzed to determine whether the statement should be considered for in- 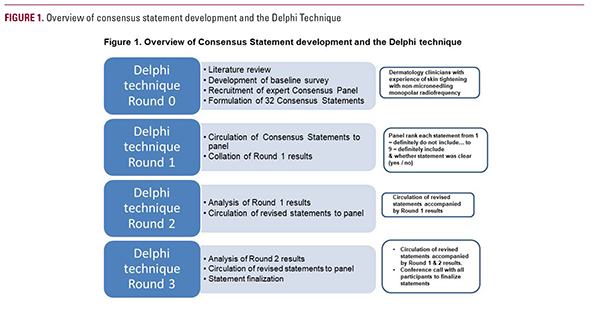