treatments. The patient indicated that she had no trouble caring for the areas treated and that she believes that the HP40 was effective in the removal of her SKs. She observed that a majority of the treated SKs completely disappeared, and the ones that did remain after treatment had a reduction in size. The patient expressed that she was delighted with the outcome and that the treatment has improved her lifestyle. The patient proclaimed that she expresses more confidence and rejuvenation as her skin appears “more youthful and feels younger” since the treatment.

The two patients, both adults over the age of 60, presented with multiple (ranging from 5-6) benign, clinically typical SKs on the neck and chest region as seen in Figure 1.

Lesions ranged from 1 to 1.5 mm in thickness and 5-15 mm in length and width. The SKs were free from any hair that could interfere with the application and diminish the effect of the topical solution. Prior to the application of the topical solution, each targeted SK was disinfected and degreased with alcohol. The treatment was applied by a physician using the single-use, disposable applicator provided with Eskata. Topical solution was applied onto the targeted SKs, and each SK was rubbed, using the angled soft tip of the disposable applicator, with moderate pressure in a circular motion for approximately 20 seconds. The application process was designed to saturate the lesion with the HP40 solution including under any lesion edges using the tapered applicator tip. Treatment cycles were repeated up to 4 times per targeted SK and, according to the instructions for use for Eskata, each targeted lesion requires 60 seconds between each application. Only one treatment session was given for each patient. In some cases, two or more may be required for best results.

Seborrheic keratosis can impose a substantial burden on individuals due to their unappealing appearance, potentially accompanied by medical or cosmetic concerns as well. Many individuals express dissatisfaction with the presence of SKs and seek removal of these benign lesions. From a survey of 406 patients who sought treatment for their SKs, 53% stated they did not like how SKs looked, 33% reported that they were embarrassed by the appearance of SKs, and 31% indicated they believed the presence of SKs resulted in an older appearance.6 Furthermore, 61% of surveyed female patients stated they have actively tried to disguise the presence of SKs with clothing, make-up, and jewelry.6

Similarly, both participants described here indicated they were bothered with the appearance of their skin and uncomfortable with how people perceived them. The patients stated that the presence of SKs hindered their confidence and negatively affected the quality of their life. The individuals became interested in HP40 treatment after learning about the potential benefits and reduced risks compared to traditional therapies for SKs including pigmentary changes, erythema, edema, crusting, and blister formation.19,21,22 While one individual stated that he had no side effects during and after treatment, the other said that she felt no pain during the initial treatment and after, only mild erythema, tenderness, and minor pain that lasted approximately 1 week. Each expressed no evidence of post-treatment permanent pigment alterations, and many of the targeted lesions were clear or partially clear within 1 to 2 weeks after treatment (Figure 2). Ultimately, both individuals expressed satisfaction with the pro- 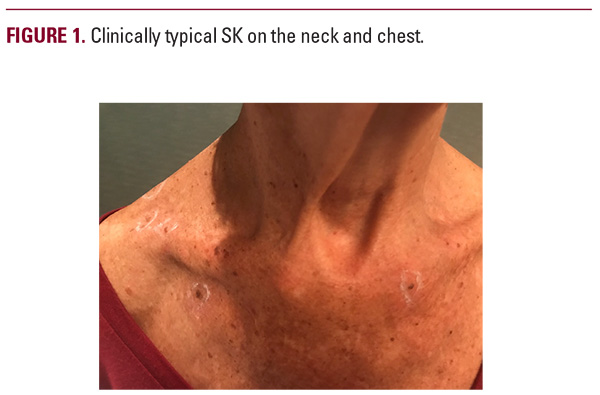